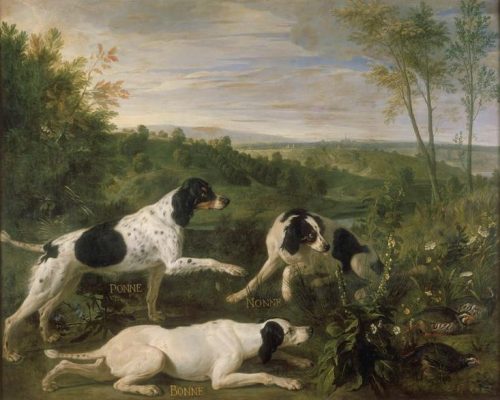 If you consider yourself knowledgable about dogs and don’t know the name, John Caius, you’ll want to “up your game.”

Dr. John Caius (born John Keys in 1510) was physician to King Edward VI, Queen Mary, and Queen Elizabeth I of England. His account of the English sweating sickness is considered to be one of the earliest accounts of what we now know as an epidemic, and it’s thought that William Shakespeare’s character, Dr. Caius, from The Merry Wives of Windsor, was based on Caius himself. For our purposes, however, it was his literary work, De Canibus Brittanicis, that is worthy of your attention. Translated in 1576, the work is also known as The Dogs of Britain, and was the very first dissertation on dogs of which we know.  The work was so detailed that its description of a shepherd’s dog is recognizable as such even today. His description of a setter is too lengthy to repeat here, but we will share that some 400 years ago, he wrote that the “cunning and artificial endeavor” had been domesticated and “brought up at home with offals of the trencher and fragments of victuals” which was another way of saying that a dog becomes all the wiser if fed from off his master’s plate, and the dog’s food might be like that of the rest of the human household.”

Somehow, we would not be surprised to learn that in a dog culture known only to dogs, Dr. Caius would be considered a patron saint.

Image: Setters in France after the painting by Francois Desportes (1663-1743)

One thought on “Dr. Caius, a Name You Should Know”