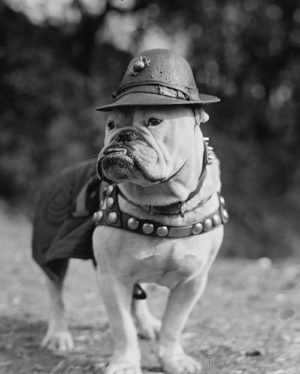 “For a good Mastive dogge, a case of bottles replenished with the best lickour, and pray proceur mee two good bulldoggs, and let them be sent by ye first shipp.”

This sentence is thought by some to be the first mention of the “Bulldog” not only by its modern name, but as the distinctive name specific to the breed we know today by that name. It came in a letter written by Prestwich Eaton from St. Sebastian to George Wellingham in St. Swithin’s Lane, London in 1631 or 1632. As an aside, he also asks for “some black satin lace for a Spanish suit.” Priorities. The dog came first.

This type of dog had been mentioned earlier in 1576 when English physician and scholar, John Caius, described these canines as “vaste, huge, stubborne, ougly and eager, of a heft and burthenous body …terrible and frightful to beholde and more fearce than any Arcadian curre.”

Caius did not, however, mention the dogs by the name, Bulldog, but rather by the term, “banndogge.” By 1592, the word, “banndogge”was still in use, but it had morphed into a new spelling as seen in Shakespeare’s,”King Henry VI.” Act 1, Scene IV: “The time when screech-owls cry and bandogs howle.’”

Some authors believe that the first clear “bulldog” citation is found in an essay written in 1752 by David Hume: “The courage of bull-dogs and game-cocks seems peculiar to England.” Three years later in his celebrated 1755 A Dictionary of the English Language, English writer and lexicographer, Samuel Johnson, observed that the “bulldog” was “particular to Britain” and “remarkable for its courage.”

There is progress in perceptions of the breed here. Moving away from an association with the horrific sport of bull-baiting, commentators began to emphasize the Bulldog’s fearlessness and English pedigree. In the last part of the 19th century, the word also lent itself to describing someone who looked like a bulldog as being “bully.” In Mary Elizabeth Braddon’s 1883 novel, Phantom Fortune, she writes: “Angelina is bully about the muzzle.” (Angelina is a fox terrier), though to be more accurate, the word, “bully,” had already been in use in the early 1700s as a way to describe intimidation.

By WWII, being a Bulldog was a compliment, a symbol of British indomitability and tenacity, and happily, that interpretation has endured as witnessed by the fact that over 424 schools, businesses, and branches of the military have the breed as their mascot. This would include, of course, the U.S. Marine Corps who can thank the German army for their symbol. Attacking Marines during WWI were called, “teufel-hunden,” or Devil-Dogs: Vicious, wild, and ferocious mountain dogs of Bavarian folklore.

It didn’t take long for a U.S. Marine recruiting poster to show up depicting a snarling English Bulldog wearing a Marine Corps helmet. It stuck. The Marines unofficially adopted the English Bulldog as their mascot. In 1922 at the Marine base in Quantico, Virginia, the Marines got themselves a pedigreed English Bulldog named, “King Bulwark.” In a formal ceremony, Brigadeer General Smedley D. Butler signed the documents that enlisted the Bulldog (renamed Jiggs) for the “term of life.”

When Sergeant Major Jiggs’ died on January 9, 1927, his passing was mourned throughout the Marine Corps. His satin-lined coffin lay in state in a hangar at Quantico flanked by two Marine guards and banks of flowers. He was interred with full military honors.

Not bad for a breed that was “vaste, huge, stubborne, ougly and eager, of a heft and burthenous body …terrible and frightful to beholde…”

Image of Sgt. Major Jiggs in 1925, an English Bulldog and the first mascot of U.S. Marines Corp