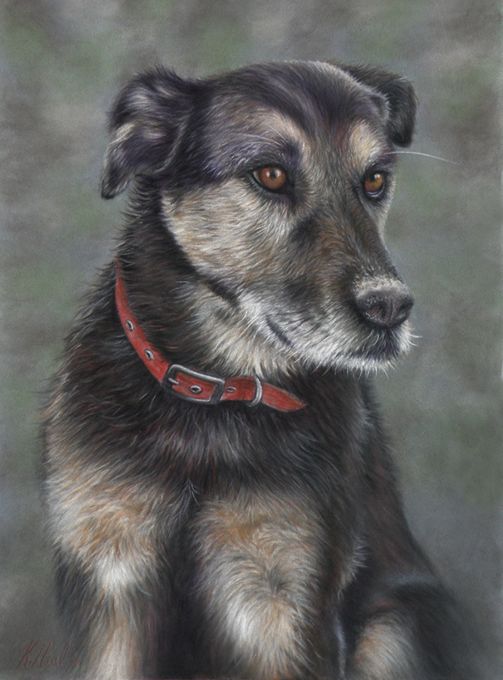 Shepherds of old, and the sheep industry of new, have relied on sheepdogs to move stock, but different herding breeds have different specialties. A “driving” breed is not the same as a “drover;” A drover was a breed that took sheep over distances to market, usually on roads or lanes. The Old English Sheepdog was historically a drover. A dog that drives stock, however, typically pushes animals forward to a gate, trailer, or a point that isn’t anywhere near the handler.  Sometimes, the shepherd needs his dog to pressure stock in a way that changes their direction (these directions are called “flanks”). The New Zealand Huntaway (the second most popular dog in New Zealand) is a unique sheep dog that uses its loud, deep voice to drive sheep. It’s used today to drive huge flocks of sheep by barking and moving back and forth behind the sheep. Developed by mixing a variety of sheepdogs, including the Border Collie, Bearded Collie, Labrador, Rottweiler, Harrier, Gordon Setter and Smithfield Collie (although the exact origins are unknown),  the Huntaway fills a niche in the sheepdog world with its ability to herd via barking, rather than sight alone. As an aside, these have been working dogs whose appearance was never been specifically bred for, and historically, there has been a huge variety in the appearance of this breed, but in 2013, the Huntaway dog was recognized by the New Zealand Kennel Club as a working dog, and its breed standard is a bit liberal in certain respects; it also makes the point that the Huntaway is “first and foremost a working breed, selected solely for its ability to tirelessly work stock day in and day out. The only consideration when breeding should be as to their working ability and physical soundness. There should be no deviation from this when breeding.”

Image of “Austin,” a New Zealand Huntaway Dog in pastel by Karen Neal whose work you can find here.