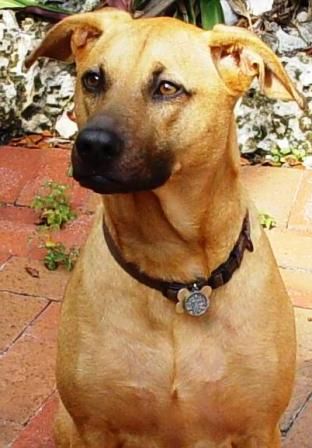 Most of us may never have heard of the Combai, but 19th century British soldiers encountered these dogs when dealing with the army of the Marudhu Pandias in its revolt against British rule of the Kalaiar Koil. The breed native to Southern India was named for the town in which it was developed, Kombai in Tamil Nadu, India, and was originally developed to hunt bear and other large, dangerous animals by Indian royalty. In more recent times, the Combai has become a multi-purpose guard dog for rural farmers, but the breed has old roots dating to the 15th century, and some breed enthusiasts and natives of South India believe that the breed existed even as far back as the 9th century.

The breed described as having a ridge running down its back is in trouble; one conservative estimate puts the number of pure breed Combai dogs across India at less than 100, with most experts believing the breed to be on the verge of extinction.  Some believe the popularity of imported breeds in India, and unsubstantiated claims that Combai dogs are ferocious, have contributed to its fragile state. Breeders in India can also make more money by selling imported breeds such as the Pug, Labrador Retriever, and German Shepherd Dog, and this surely has played a significant role in the Combai’s low numbers.

The Kennel Club of India says it’s working to promote the Combai and other native breeds. Mention has been made of starting a,  ‘Dog of the Year – Indian Breed” category in competition to encourage owners and breeders to promote Indian breeds.

One thought on “The Endangered Combai”