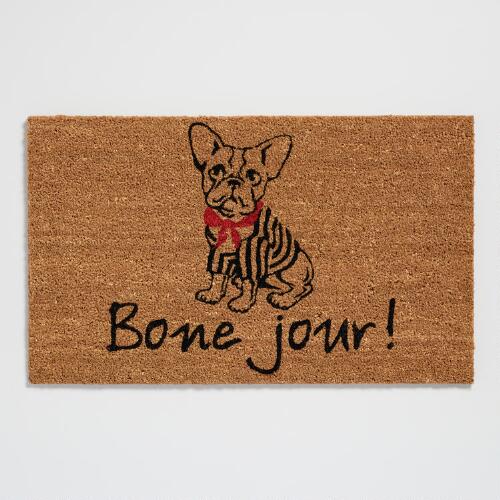 La Fête Nationale, or French National Day, occurs on July 14th and is often thought of as France’s Independence Day. It commemorates the day in 1789 when 80,000 people amassed outside the Bastille, some of them storming the fortress/prison, which began the French Revolution. We noticed that World Market, a chain of specialty/import retail stores, is marking the day with bargains, many of which feature the French Bulldog.

Just to be historically accurate, the French Revolution was not a good time for purebred dogs (let alone the 33,188 people executed by guillotine,  and another 25,000 in summary executions across France. The guillotine, by the way, was a legal form of execution in France until 1981).  A large number of pedigree dogs were burned in the Place des Greves, their owners having abandoned them in the first wave of emigration following the outbreak of the French Revolution. Other dogs were killed on sight because of their breed’s association with the aristocracy. Papillons, for example, were so thoroughly associated with the Royal Court that according to author, Katherine Ashe, little guillotines were made for the little dogs during the French Revolution, and the breed was nearly annihilated in France. Other breeds suffered great losses including the Poitevin and Dogue de Bordeaux.

who owned many dogs before, and during, her reign, but Coco was her favorite. Historians tell us that Coco had been entrusted to the governess of her children, Madame de Tourzel, and that de Tourzel was among the crowd assembled in Place de la Concorde on the day Marie-Antoinette was taken to the guillotine, and that she was holding the dog in her arms. Coco survived the Revolution and spent the entire Napoleonic era at the Hapsburg court in Austria. When Napoleon was defeated, Coco was still alive at the grand age of 22.  Following the restoration of the Bourbon monarchy, Coco actually returned to Paris and died shortly afterwards.

Coco’s body rests in the sumptuous gardens of the Hôtel de Seignelay under a grave marker not far from the spot where Marie-Antoinette was beheaded. The French government came to own the hotel and put it up for auction to raise funds for the public treasury. One of it selling points to potential purchasers? An item of historical interest – the gravestone marking the final resting place of Marie-Antoinette’s beloved Coco.

As an aside, French Revolution buffs may enjoy this page of trivia about that period.