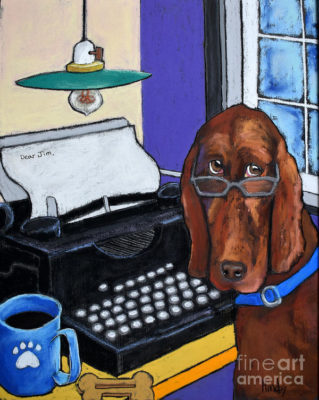 “When a child is locked in the bathroom with water running, and he says he’s doing nothing but the dog is barking –  call 911.”

“I’ve decided life is too fragile to finish a book I dislike just because it cost $16.95 and everyone else loved it. Or eat a fried egg with a broken yolk (which I hate) when the dog would leap over the St. Louis Arch for it.”

“Youngsters of the age of two and three are endowed with extraordinary strength. They can lift a dog twice their own weight and dump him into the bathtub.”

“When you leave [the dog] in the morning, they stick their nose in the door crack and stand there like a portrait until you turn the key eight hours later.”

If you own a faithful dog and/or are a parent, you know these quotes are spot on.  These gems were written by Erma Bombeck, an American humorist whose newspaper column, “At Wit’s End,” describing home life and her observations of the world around her was hugely popular from the mid-1960s until the late 1990s. We don’t think her style of humor has been duplicated since her untimely death in 1996, and what made it all the more amazing were her high spirits in spite of having endured breast cancer, a mastectomy in 1992, then kidney disease which required dialysis four times a day at her home. She died at the age of 69 from complications after a transplant surgery.

Bombeck also authored several books, and in, “If Life Is a Bowl of Cherries, What Am I Doing in the Pits?  she wrote about her beloved Irish Setter “Arlo.” We give you a taste of “Arlo’s” story when Bombeck’s husband gives her the news about the new dog:

You bought a dog for me?” I asked numbly.

“But of course. For your protection. Maybe you don’t realize the dangers of being by yourself out here in this wilderness. There are loonies and crazies running around all over the place.”

“True, but we’re all on a first—name basis.”

“You may be as light about it as you like, but just wait until some day when I am at work in the city, and a wild—eyed stranger knocks at your door and wants to use your phone on some pretense and you’ll be mighty thankful Arlo is around.”

I looked at Arlo. He was lying on his back in front of the fireplace with all four paws sticking up in the air—passing gas. The mental picture of a sex pervert at my door and the only thing between us was Arlo, sent a shiver down my spine.

It was several weeks later that Arlo was to be put to the test. I answered the door to find two men standing there rubbing Arlo behind the ears. “Pardon us,” said one of the men, “but our truck broke down and we’d like to phone our company for help.”

I grabbed Arlo by the collar and jerked him to his feet. “I must apologize for the dog,” I said. “I’ll try to hold him so he won’t tear you to shreds. Down boy!”

The men looked at one another and shrugged as the dog blinked sleepily and slumped to the ﬂoor. “He looks pretty friendly to me,” said one of them. I knelt and pushed back Arlo’s lip to show his teeth. When I released the lip, it fell back into a ripple as he licked my hand.

“You may not believe this but I had to register this dog with the police as a deadly weapon. Just ask anyone around here and they’ll tell you about Arlo.”

“Steady boy!” I said, propping him up to get him off my foot. “just don’t make any sudden moves,” I cautioned.

Many of our readers spend a lot of hours on the road driving to dog shows, training class, breedings, etc. We heartily recommend listening to Bombeck’s books on CD to pass the hours.

About our image: “Augie” was a loving Irish Setter who “penned” a letter to the Governor of Illinois, Jim Thompson, and much to the surprise of Augie’s owner, Governor Thompson sent a reply back. No word on what either of them wrote to the other, but this print is available as artwork, in lifestyle items and home decor here.