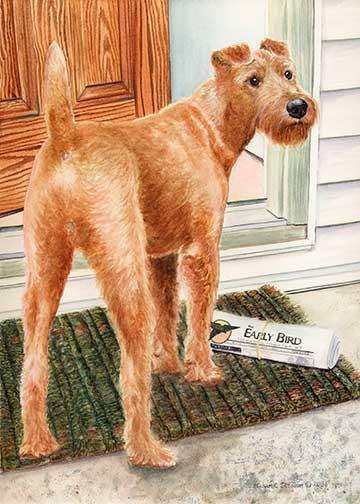 In the early 20th century, Irish terriers became popular with Irish nationalism, and one didn’t have to have a big house or land to keep an Irish terrier.

Irish Terriers went on to be the first of the Terrier Group to be recognized by England’s Kennel Club of England as a native Irish breed just before the end of the 19th century. The first showing of an Irish Terrier was in Glasgow in 1875, and by the 1880s, they were the fourth most popular breed in Ireland and Britain. The first Irish Terriers “stormed the beaches” in the U.S. in the late 19th century, and it didn’t take long for the breed to gather admirers.

Unbelievably – and sadly – the Irish Terrier is now on the brink of trouble. With only 384 registrations in 2018, it is a breed “under watch” as a vulnerable breed by England’s Kennel Club.  Why?

According to the Kennel Club, many native British breeds of dog are at risk because people either don’t know they exist or because they not fashionable (grrrrr!)  The six most popular breeds in the UK – the Labrador Retriever, French Bulldog, Cocker Spaniel, Pug and English Springer Spaniel and Bulldog account for more registrations between them than the remaining 214 breeds of dogs.

In Ireland, a lot has changed regarding dog ownership and dogs have gone from having a job such as hunting or retrieving to providing companionship. “Now native breeds only comprise of about 10% of the pedigree dog population,” according to David Blake Knox, author of The Curious History of Irish Dogs.