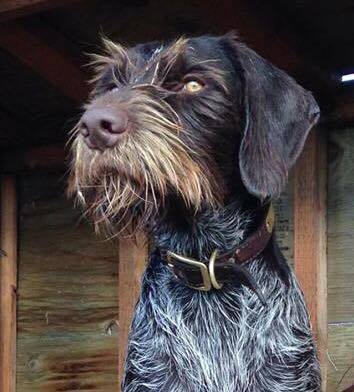 According to some sources, the Deutsch Drahthaar is the most frequently used hunting dog in Germany, and the number one sporting dog in Europe, and for good reason: It’s not uncommon for the hunter with a Deutsche Drahthaar to hunt waterfowl at the crack of dawn, upland game later in the afternoon, and end the day by tracking a wounded deer – all with the same dog. The breed hasn’t become as popular in North America, possibly because hunters here have become accustomed to hunting with “specialists,”  i.e. retrievers, pointers, and tracking dogs, but the concept of a highly versatile dog is steadily catching on with serious hunters who require a competent dog for the various types of hunting they do.

Indeed,  the “spiritual father” of the Drahthaar, Sigismund Freiherr vom Zedlitz und Neukirch (also called Hegewald) demanded that the primary breeding goal of this hunting dog be versatile performance ability.  He is considered the father of the German utility hunting dog performance breeding test, and his thoughts have become the principle of Drahthaar breeding: “Through performance to standard.” It is from him that the Hegewald test takes its name.

Each year the VDD organization (Verein Deutsch Drahthaar) holds a large HZP (The HerbstZucht-Prüfung, or fall breed test) in conjunction with a breed show called the ‘Hegewald’. This is something like a ‘world dog meet’ for Drahthaars.  Drahthaars are required to meet strict formal breed standards before they can be certified for breeding purposes. These standards include an evaluation of coat, conformation, field performance, and gun sensitivity in the field and in the water. The tests are basically the same today as those developed in the early 1900’s, though there have been minor adjustments to the breeding and testing regulations. They determine the natural abilities of young dogs as they pertain to the dog’s suitability for future use in versatile hunting and as a breeding dog. Breed tests also serve to recognize the genetic value of the parents.

One of the pioneers of the versatile dog movement, Dr. Stroese, once said that the main purpose of a VGP (a test that evaluates a finished versatile hunting dog who, at this level, is expected to handle any game in any hunting situation) is “to produce dogs for the ethical conduct of hunting and to foster the knowledge of training and handling these dogs in the hunting community.  This is the exclusive purpose of a VGP…a dog that has passed the test – provided it is handled correctly and has appropriate practice – must be able to perform as a truly versatile utility dog in the hunting field.  And this is what is most important.”

Image: Photo of Kim Blaskowski’s Deutsch Drahthaar shared with consent of the owner