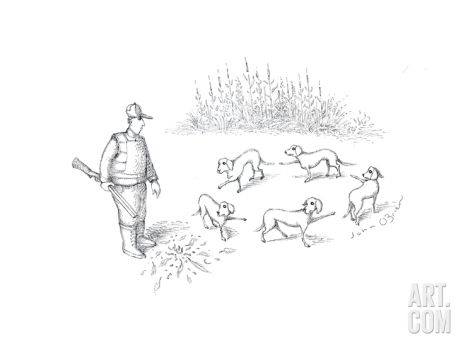 The smart aleck answer to our title question is that Pointers point because of their instinct to point, but the question is a reasonable one. So much so that a few years ago, the University of California/Davis was collecting DNA from pointing dogs
in hopes of tracing a ”Pointing Dog’s Family Tree” and unlocking the origins of pointing behavior. Unfortunately, we’ve not been able to find the results – or even an update – to such a study, and if any of our readers can provide one, we’d love to see it.

That said, some cynologists look to the wolf for a quasi-explanation: When the lead wolf in a pack smells prey, it freezes and points itself or its muzzle in the direction of the scent. This gives the other members in the pack a chance to pick up the scent, as well. There is a singular pause before all the wolves are in unison, and it is this “wolf pause” that experts think Pointing breeds are imitating.  Charles Darwin though differently. He thought that a dog’s act of pointing was merely the exaggerated pause of an animal preparing to spring on its prey, and that over time, the behavior was selectively bred by hunters who used it to their advantage.

Certainly, Pointers have been “doing their thing” to at least the mid 17th century when European hunters were still using nets to capture game birds.  Some dog experts believe that the ﬁrst pointing dogs came from a single, common ancestor like, say, the Old Spanish Pointer; a “Pointing Dog’s Family Tree” would certainly help our understanding of the behavior.  Until that day, we can only know for certain that over time, each region of Europe developed its own pointing dog, along with characteristics that were selectively bred to suit the type of prey, and the region in which the dogs worked.

As for our image, it comes from a cartoon giclee print by John O’brien which can be purchased here.