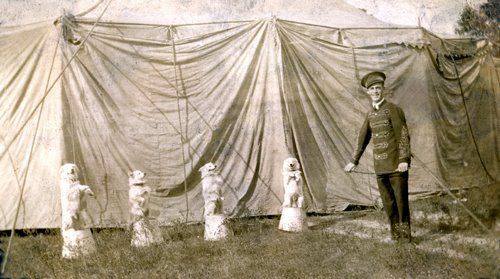 “Stout’s Pal Pierre” was the very first dog ever to walk a tightrope. His breed? American Eskimo Dog. He was with the Barnum and Bailey circus at the time. Wire walking, performing with clowns, and weaving in and out of horse hooves and wagon wheel spokes while the wagon was moving were all part of the show. One particular act we read about in Caroline Coile’s book, “American Eskimo Dogs” was the “all white statue” act in which the white dogs, white horses, and white painted and costumed actors performed tricks, but froze at various intervals so that they appeared to be one large statue.

Image taken from Pinterest (but seen all over the Internet); credit happily given upon receipt of information.