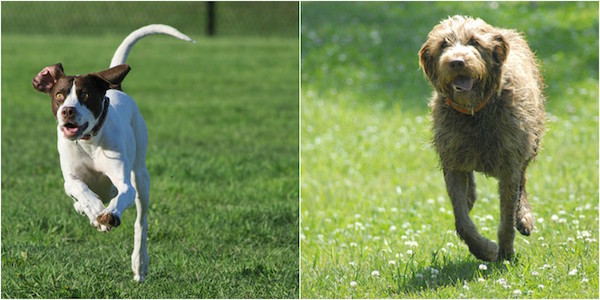 Do enough research and one is bound to run into differences of opinion. While it’s generally agreed upon that gun dogs are breeds of hunting dogs that help hunters finding and retrieve game, there is less consensus on which breed was the first of the European gun dogs to be recognized in the United States. Several sources maintain that the Wirehaired Pointing Griffon was that breed, having been accepted by the AKC in 1887. The Pointer, however, was recognized nine years earlier in 1878.

What’s up with this?

The discrepancy may come down to semantics. The Pointer is a distinctively English breed, but for many years (perhaps even now), there are those who don’t consider England to be part of Europe. It’s complicated, and to learn more about why it’s complicated, read this. If the question, then, asks which of the European gun dogs was the first to be recognized in the United States, there will be those who say it wasn’t the Pointer because the breed is English, and England isn’t in Europe.

Then, too, there are those experts who maintain that the Pointer isn’t a versatile gun dog since it’s only highly skilled at one task. Shoulder shrug. The collective “we” wouldn’t be purebred dog people if we didn’t debate the finer points of our breeds. We’ll leave this particular discussion to be resolved by the experts and choose instead to use the opportunity to gush that both breeds are terrific, but, of course, different from each other. People tend to love whatever breed they’ve chosen for themselves above all others, and we admire their loyalty.

The WPG is an adaptable bird dog, designed to work efficiently with an on-foot hunter who may prefer a dog not known to range as far or as fast as many other pointing breeds.  A Pointer is fast and durable enough to last all day in the field, and known to “stand steady to wing and shot,” meaning the dog will hold his pointing position for “ages,” even when birds fly and guns blast. Both great breeds, both accepted by the AKC in the 19th century, and each different from the other.