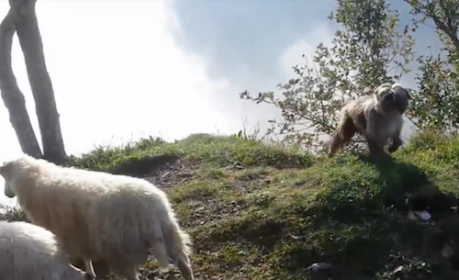 Pyrenean Shepherds (or Pyr Sheps) have been herding livestock in the mountainous Pyrenees region of France and Spain for hundreds, if not thousands of years, and certainly during medieval times. Many experts, in fact, regard it as one of the oldest known breeds of herding dog. A breed this old often comes with colorful myths passed down from one generation to the next, such as the one that claims the breed is descended from native Pyrenean foxes and bear. Other folk tales say the Pyrenean Shepherd dog was the original dog of Cro-Magnon man, though this last bit might not be that implausible since bones of similarly built dogs have been found in Neolithic fossil deposits.

While some sources say the breed is less biddable than many other herding breeds, the video we found would suggest otherwise. The agility of the Pyr Shep in the clip below is impressive to watch, as is his challenge to get sheep through a tiny slit in a wall. Most breathtaking is that the farm is situated on a cliff, and that opposite that tiny slit in a wall is a sheer drop. There is little room for error for this dog. Check it out!

5 thoughts on “A Gutsy Pyr Shep”