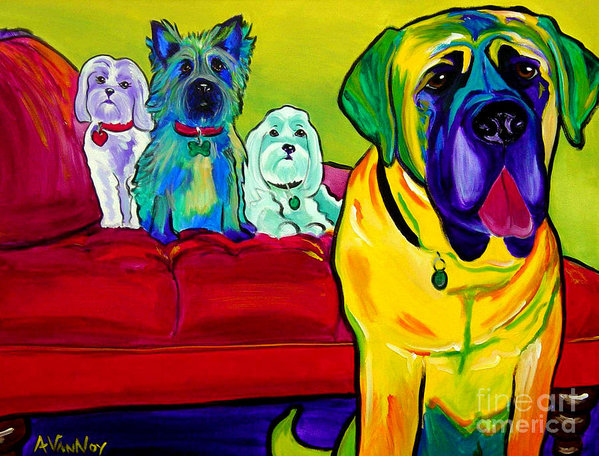 During the Viet Nam war, military dogs were regarded as “surplus military equipment,” a situation that has since been rectified, but too late for many dogs that served with distinction. It wasn’t the first time. Julius Caesar was so impressed with Mastiffs that fought alongside their owner-soldiers that Roman emperors came to use a “Procurator Cynegii” (Procurer of Dogs) to get dogs found throughout the empire to ship back to Rome for war use (and in the Coliseum). The Mastiff was given an unfortunate reputation for being a most proficient fighter, its loyalty perhaps mistaken for ferocity. Fast forward a few centuries, and history records that Mastiffs taken to the New World with Christopher Columbus were classified as “weaponry.”

We’re tempted to say, “What a bum rap,” because today’s Mastiff is bred for gentleness to be an excellent companion, but large enough to give intruders pause. They can also make wonderful Service Dogs, and we site former the experience of former Marine, Tony Austin, who struggled with adapting back to civilian life while dealing with post traumatic stress disorder. That all changed when he got “Hadji,” the dog of his dreams. Read more about Austin’s compelling story, and the tough decision he might had to have made had “Hadji” not been the literal dog of his dreams.