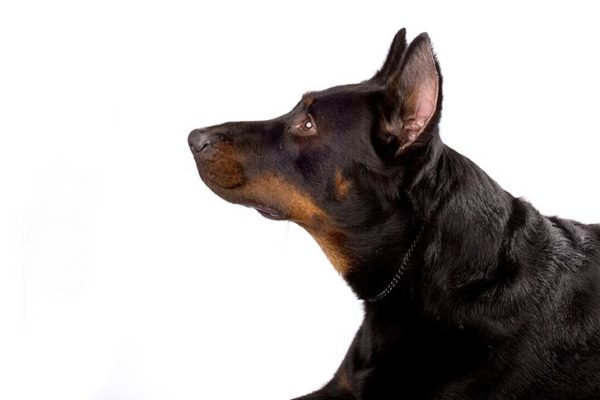 Recognize the breed of the dogs in the video clip below?

Being canine villains in a James Bond movie is certainly not our idea of the best PR for a breed, and not even remotely close to the moniker that French novelist, Colette, gave the Beauceron.

While Abbe Rozier was the first person to differentiate between the long and short coated varieties of French sheepdogs in the “Guide to Agriculture” published in 1809, describing them respectively as the Berger de Brie and Berger de Beauce (or the Briard and the Beauceron), it was Colette, 1948 Nobel Prize nominee in Literature, who gave the Beauceron its nickname: “Gentilhomme Paysagnard,” or “Country Gentleman.” Dazzled by the breed’s noble and commanding presence, she wrote strongly in their favor in her trademark prose: “Affectionate, playful, superb with children, absolutely and deeply attached to their masters. But at the same time, there is something mysterious about a Beauceron. They are like some people who don’t talk much but have a strong presence. They have a dimension, a depth, I have not found in other dogs.”