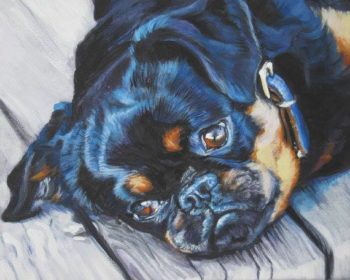 The Brussels Griffon comes in a rough coat and a smooth coat called “Brabancon.” Brabancons, which have existed for over 200 years, emerged out of Belgium following an increased interest in the breed because so many French royals owned the dogs, including Queen Henrietta Maria who took a fancy to the little dogs in the late 1800s. In fact, the Queen was an avid fancier who never missed a Belgian dog show, usually with her daughter, and would go on to breed the Griffon Bruxellois which gave the breed international attention.

Perhaps this notice lead to an increased interest in miniaturizing the breed using Pug, Ruby King Charles Spaniel, and Affenpinscher bloodlines. The result was the three varieties of Brussels Griffons we see today. In Europe, the breed was separated into three different breeds determined by the coat: The smooth-coated variety was named the Petit Brabançons (Petit Brabançon meaning “small Brabant Griffon”), the Brussels Griffons having a red/fawn rough coat, and the Griffons Belge possessing the rough coat of any color other than red or fawn. In America, however, these dogs are considered to be one breed: The Brussels Griffon.

Interestingly, all are believed to have descended from the Smousje, a small, rough coated terrier-type dog used as a ratter.