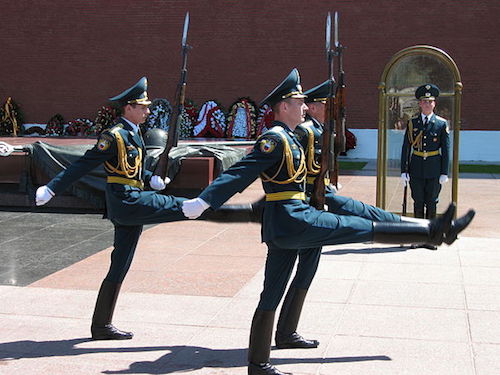 Assuming that a dog isn’t suffering from a cerebellar disorder or other malady, a dog that exaggerates the lifting of its forelegs is said to be “goose-stepping.”

Unlike the Russian Kremlin Guards seen goose-stepping at near the Tomb of the Unknown Soldier in Moscow in this photo, a dog that is “goose stepping” looks a little like a dog that is exhibiting a hackney gait: High stepping, straight-limbed, and a strutting action.

What’s different is that the accentuated lift of the forelimbs is coupled with full a extension of the front pasterns and feet before placing them in contact with the ground. The dog seems to have good reach, but look closely, and you’ll see that the dog’s actual front foot contact with the ground is delayed which makes an effective reach considerably shorter.  A normal dog barely picks her foot up off the ground to move it forward as efficiently as possible. A goose stepping dog (or one that is ataxic) may pick her foot up past her elbow which means she then has to bring her foot down quickly to get it on the ground before she picks up the opposite foot. As a rule, this is caused by either a short upper arm and straight shoulder, an almost total lack of front-limb angulation, an inability of the ligaments to allow full extension, an incomplete extension of the hock at the end of that rear limb’s extension, or the result of an upright shoulder/upper-arm combined with overdone stifle angulation. It’s a fault in any breed.