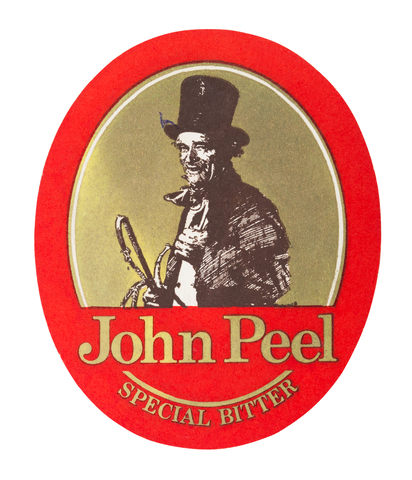 It’s been said that any discussion of the Lakeland Terrier would have to include the name of John Peel, though in our admittedly limited research, it soon became apparent that not everyone was a fan, let alone convinced that the man hunted with Lakies.

John Peel would have been thirty years old in 1806. Described as a famous huntsman, he was the Cumbrian Master of Foxhounds. He had a small farm at Ruthwaite, and the low country between of Skiddaw and Carlisle was said to be his hunting grounds. That this area is the home of the breed is one reason Peel may have become associated with the Lakeland; Early colored terriers of the Lake District were typically identified by the names of their breeders or for the areas in which they were bred, and thus there were Ullswater Terriers, Lowther Terriers, Cumberland Terriers, Patterdale Terriers, and yes, John Peel Terriers, also known as  “John Peel Foxing terriers.”  In fact, one writer suggests that the “Russell Terrier” and the “Parson Russell Terrier” descended from the original “John Peel Foxing terrier.” Dog writer, Mr. Robert Leighton, concurs.

Some sources, however, maintain that there is scant evidence to support Peel having hunted with fell terriers, though it is known that Peel used Harriers and Foxhounds. Indeed, it wasn’t until 1912 that the current name, the Lakeland Terrier, was even chosen for the breed, and by then, Peel had been dead for over 50 years.

There are those who object to glorifying a chap whose zealous enthusiasm for hunting resulted in his farm becoming neglected, his business suffering from inattention, and his family becoming impoverished. And if evidence is anemic linking him to the Lakeland Terrier, one might reasonably ask why John Peel is famous?

In part, it’s because Peel romanticized hunting for many people, and for that reason, his grave was vandalised by anti-hunting activists. Most famously, however, is that Peel became the subject of the spirited 19th century song, “D’ye ken John Peel” (“ken,” as crossword puzzle enthusiasts know, means ‘to know’ in some dialects of the North of England). Written by his friend, Woodcock Graves, in honor of Peel,  the lyrics set to music and presented to the local public by Mr. Metcalfe of Carlisle lead to the hunting ditty becoming sung with passion at gatherings:

For the sound of his horn brought me from my bed,
And the cry of his hounds which he oft time led,
Peel’s “View, Halloo!” could awaken the dead,
Or the fox from his lair in the morning.

Yes I ken John Peel and Ruby too
Ranter and Royal and Bellman as true,*
From the drag to the chase, from the chase to the view
From a view to the death in the morning

And I’ve followed John Peel both often and far,
O’er the rasper fence and the gate and the bar,
From low Denton Holme up to Scratchmere Scar,
Where we vie for the brush in the morning
For the sound of his horn, etc.

*Ranter and Royal and Bellman were said to be the real names of Peel’s hounds, dogs he said in his later years were the very best he ever had or saw.

One might note the lack of mention of any terriers, but other writers have suggested that back in those days, few people who could write did so about working dogs, and those who owned fell terriers were probably unable to write a book. Still, Brian Plummer, author of The Fell Terrier, mentioned that without terriers at the end of a fox hunt, the work of hounds would be meaningless since it was the terriers who bolted the fox.  The presence of the hounds, then, implies the presence of terriers.

Still, we have yet to find anything conclusive linking John Peel to the Lakeland Terrier.

We did come across an article appearing in a 1954 issue of Country Life entitled (tantalizingly) “John Peel Fact and Fiction,” but the digital version is unreadable. We’ll keep plugging away at it and if it changes anything written so far (or if a Lakeland Terrier historian has further information), we’ll be updating this post.