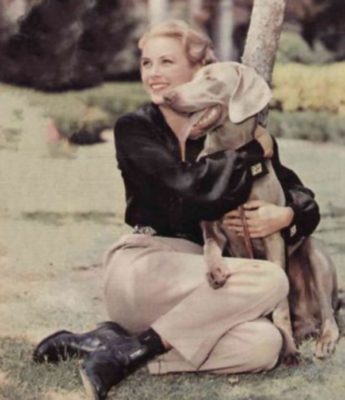 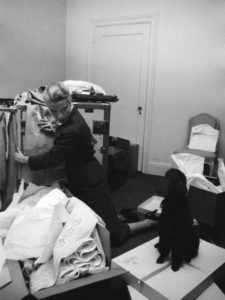 For many years, purebred dogs were long appreciated by Hollywood’s famous residents, and various breeds were often seen with the movie stars who gave the town its glamor.  Before she became a princess, Grace Kelly was among them. It was the act of becoming that princess that got Grace her Weimaraner, a gift from Kelly’s brother, Jack, who gave her the dog as a wedding gift when she married Prince Rainier III of Monaco in 1956 (he also gave her one of his Olympic bronze medals in rowing;  their father, Jack, won three Olympic gold medals in sculling, and is the only rower in the U.S. Olympic Hall of Fame).

Grace Kelly was also given her beloved French Poodle, “Oliver,” as a wedding gift from Cary Grant, one of the most enduring friendships that Grace Kelly had. Cary and his wife had a Poodle named “April” with whom Grace often played when visiting their Palm Springs home.

She arrived in Monaco for her wedding with both dogs.