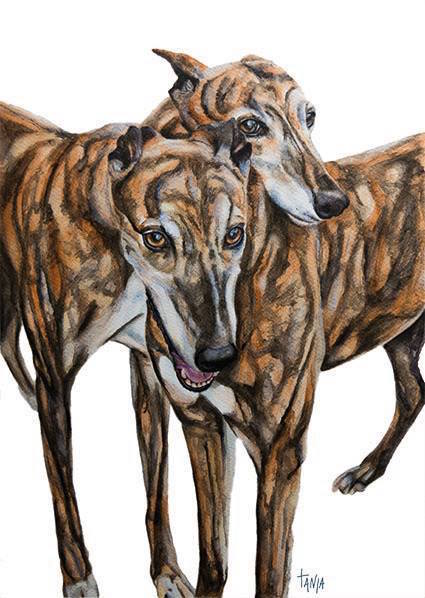 From a hematologic standpoint, Greyhounds have really interesting blood! In fact, there are enough differences from the blood work of other breeds to make the blood workup of Greyhounds look deceivingly “normal” or “abnormal” if one isn’t familiar with the differences.

Greyhounds have more red blood cells than other dogs which means higher packed cell volume, and hematocrit (HCT), hemoglobin concentration, red blood cell count, and whole blood viscosity. A healthy Greyhound has a HCT of 50-63%, something that in any other breed could result in a presumptive diagnosis of polycythemia or erythrocytosis. It is because they have more red blood cells, and elevated parameters for RBC, hemoglobin, and PCV / HCT, that Greyhounds are so desirable as blood donors.

Platelet numbers are lower on average for a Greyhound than in other dog breeds, and this might be mistaken as a problem.  It’s thought that Greyhound WBCs, platelets, and total protein may be lower to physiologically “make room” in the bloodstream for the increased red cell load.

Normal reference values for Packed Cell Volume and hematocrit levels in dogs range from 35 to 50%, but Greyhounds typically have PCVs of 45 to 65%.

Eosinophils, which are white blood cells involved in immunity against parasitic infections and allergic reactions, are characteristic ally orange granules in other breeds, but eosinophils in Greyhounds frequently lack that characteristic and can be misdiagnosed as “toxic neutrophils,” cells commonly found in severe infections.

Creatinine levels also run higher in a Greyhound than other breeds, mostly because of their large lean muscle mass. A study at the Auburn University College of Veterinary Medicine found that 80% of retired greyhounds they tested for the study had creatinine values up to 1.6 times as high as the top of the standard reference range for other dogs. As a lone finding, an “elevated creatinine” is not indicative of impending kidney failure. If the BUN and urinalysis are normal, so is the “elevated” creatinine.

As for proteins, a Greyhound’s total proteins tend to run on the low end of normal – T.P.s in the 5.0’s and 6.0’s being the norm. While the albumin fraction of T.P. is the same as other dogs, the globulin component is lower in a Greyhound.

As interesting as all this is, it’s critical that when needed, a Greyhound be attended by a veterinarian aware of its special blood characteristics lest something go undiagnosed, or needless treatment is applied.