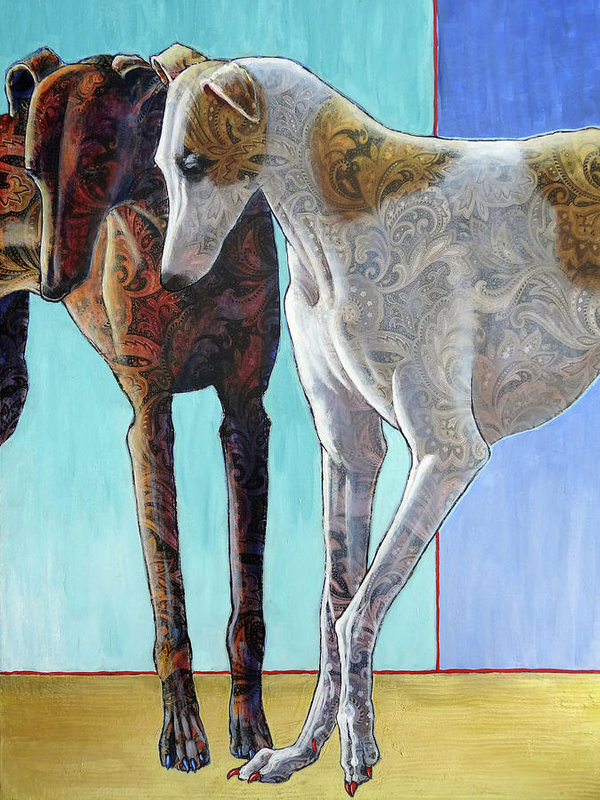 In addition to having higher levels of red blood cells than other breeds, it’s said that the Greyhound has been given more names in its history than any other breed, as well.

It’s also just possible that there are as many explanations for the breed’s name as there are names.

A common belief is that because the earliest Greyhounds were mostly grey in color, that became their name: Greyhound.  We’re not sure about that, but according to the breed standard, color is immaterial.

Proponents of the “Old English” school of thought maintain that the name is derived from “gre” or “gradus,” meaning “first rank,” so that “Greyhound” would mean “first rank among dogs.” Other sources think the name came from the Old English “grei,” meaning dog, and “hundr,” meaning hunter. One wouldn’t think there would be too many way to interpret Old English, but other experts say the name came from the old English, “greuhund,” which they say means “running dog.”

Then there is the “Greek” school of thought: A few breed historians think that “Greyhound” may have come from the name, “Greekhound,” because the dog first reached England through the Greeks. Others focus on various meanings or translations for the word itself,  or for specific characteristics for the breed. For example, the Greek words, “graius,” or “gracillius,” mean slender or sleek, a feature of the breed.

Some cynologists say “Greyhound” may have been a corruption of “gazehounds” since the dogs relied on sight rather than scent when hunting.  Then there are the folks who insist that the breed originated from Celtic Europeans, and refer to ‘Vertraha,’ a Celtic Arrian word for Greyhound.

The AKC writes, that “Theories of the name “Greyhound” range from derivation from Graius, meaning Grecian; the old British grech or greg, meaning dog; and the past predominance of gray as the breed’s color.”

See what we mean? Lots of theories. And getting back to the breed having been known by more names in its history than any other breed, check it out. This list comes from Desmond Morris’ book, Dogs:

2 thoughts on “One Breed – So Many Names”