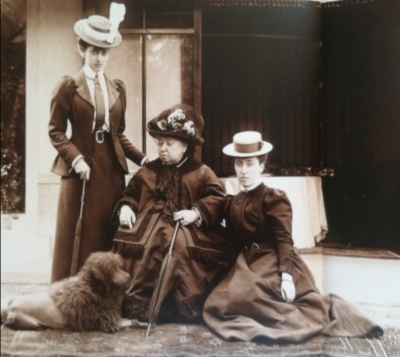 Today’s teenager may roar with laughter at what many of us thought was pretty cool “back in the day,” say, in the 1980s: Big hair, jazzercise clothes, jelly shoes, and oh, those shoulder pads!

The passage of time can be seen in how we groomed our dogs, as well, and Poodles are a great reflection of that. In this photograph taken at Balmoral is “Sammy,” a Poodle who belonged to Princess Victoria of Wales (seen standing), the daughter of King Edward VII and Queen Alexandra. Sitting at the far right is Princess Helena Victoria of Schleswig-Holstein and in the middle, of course, is Queen Victoria. The year is 1898.  Note his head coat, and compare the “bracelets” on Sammy’s legs and his hip rosettes with what we see in a show ring today!

Certainly we’ve noted trends in our own breed, the Puli. Back in the 80s, cords on the face and tail were left much longer than they are now, and were either blunt cut (often resulting in heads that looked like Chrysanthemums), or not shaped much at all. These days, cords around the muzzle rarely go past the nose, coat around the head,ears, and shoulders is layered into a pleasing “blend”, and much more consideration is given to “shaping” the silhouette. We use our own dogs as Exhibit A:

Twenty years separate the time frame in which these two dogs were shown. The dog at the left seems heavy, front loaded, and lumbering, but he was none of those things and, in fact, was a multiple AOM and group winning dog. The dog at the right, also a multiple AOM and group placing dog, as well as Best of Opposite Sex at a National Specialty, proves that “less is more.” He has had far more coat removed from his muzzle, ears, head, and shoulders, and unlike the dog at the left, his tail was stretched over his back, and the tail cords trimmed at the point they went past his withers. As we all know (or should), dogs in a show ring are compared to a standard, not to each other,  and we share these pictures only to illustrate the difference that 20+ years made in grooming this breed.

Certainly ours is not the only breed to have undergone changes. The Bichon Frise’s look of today has been attributed to Frank Sabella who in 1969 gave a grooming seminar to the Bichon Frise Club of America and set the trend for a more sculpted style emphasizing balance and proportion

Now it’s your turn. Share with us the differences you’ve noticed in your own breed’s grooming!

Did you know that in the Tarot card world, the Seven of spades refers to the mental and positive mental habits of a natural winner?Toy breed owners, remember a beloved dog, or surprise a breeder, junior handler, or one of your puppy people with a poker sized playing card with their dog's photo and name on it! The holidays are coming!We have ONE and only one card left, and it's the seven of spades available for $50. First come first served. As soon as you contact us, we will send you a Paypal invoice. Upon receipt of payment, we'll need a photo of the dog along with text ((no longer than 66 characters including spaces). If the submitted photo was taken by a professional, we need a signed copyright release form from the photographer. See sample of the completed cards here: nationalpurebreddogday.com/shop/playing-cards/original-playing-cards/
... See MoreSee Less