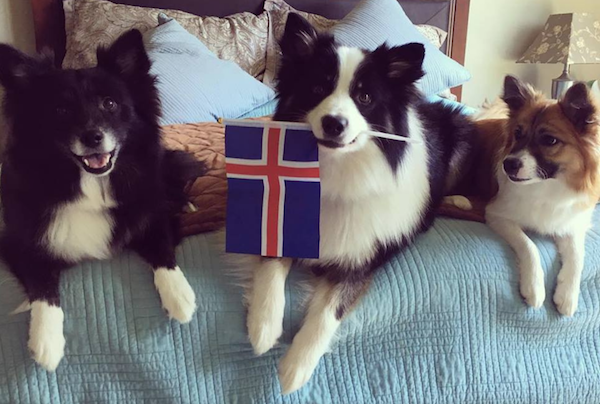 We’ll be ready next year when the fifth annual Icelandic Sheepdog Day will be celebrated across Iceland, but sadly, we missed it last July 18th.

Icelandic Sheepdog Day is celebrated on Mark Watson’s birthday (he would have been 113 year old), and if you’re wondering who Mark Watson was, read on.

Watson was a British diplomat who developed a particular interest in Icelandic archaeology (he was an honorary member of The Icelandic Archeological Society). He first visited the country in 1937, then went back a year later to explore the country on horseback. He was one of the first people to realize that Icelandic sheepdogs were on the verge of extinction, and to help avoid that scenario, he bought two sheepdogs, “Brana” from Jokuldalur and “Bosi” from Skagafjordur and sent them California where he lived for a few years.

He is widely credited with not only having saved the Icelandic Sheepdog breed from extinction, but in 1957, he also wrote the most comprehensive research on the breed, The Icelandic Dog 874 – 1956: A Research on the Iceland Dog (also Known as the Icelandic Sheepdog)  He encouraged the foundation of the Icelandic Kennel Club (the first dog show in Iceland was held in 1973 with support from Watson), and became an honorary founding member of the club. When he thought that Icelandic dog-owners needed a bit of education on how to handle and raise dogs, he wrote and privately published the pamphlet “Hundurinn minn” or, “My dog – A guide for handling dogs” in 1973.

The Honourable Richard Mark Watson died in March, 1979 and his good friend, Anna S. Snorradottir wrote, “I have never met a man of foreign origin that loved Iceland, both the land and the people as faithfully as he did.”

Little wonder, then, that the breed is celebrated on Watson’s birthday.  What we missed this year was a presentation of the breed in Reykjavík at the Árbær Open Air Museum. Stefanía Sigurðardóttir, chairperson of the Department of the Icelandic Sheepdog, talked about Iceland’s national breed. As it happened, the Icelandic Dog Breeder Association also celebrated its 50th anniversary, as well.

The image by Jelena Ćirić appeared in the Iceland Review