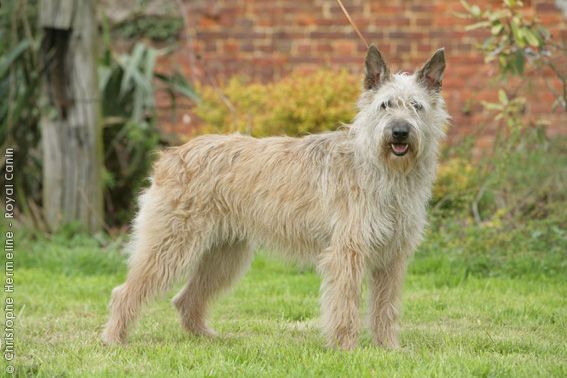 Back in the day, all Belgian dogs that worked with cattle were called bouviers (herders), and each area of the country had its own bouvier type.

Historically tasked to round-up, guard, and driving cattle in the Belgian Ardennes, the Bouvier des Ardennes has also been known as the Ardennes Cattle Dog, a breed with a reputation as being a “hard” breed, and hard working in harsh climate and difficult forested and mountainous terrain. They were also used to track deer and wild boar, and then during the two World Wars, they became poachers’ dogs. The disappearance of farms in the Ardennes in the 20th century coupled with the reduction in the milk cow herds impacted the number of all working dogs, including the Bouvier des Ardennes which, actually, was thought to have gone extinct.

In the best of surprises, researchers collecting colostrum from pregnant cattle in southern Belgium in 1985 noticed that many of the dogs hanging around the farms owned by local cattle farmers looked remarkably similar to the old Bouvier des Ardennes. In fact, they were Bouvier des Ardennes!  By about 1990, a few breeders set out to produce dogs that adhered to the original standard of the breed which had been published in 1923. As an aside, in 1903, a dog named, “Tom” who’d been “discovered” by  a Professor Reul at a Liege Dog Show may have been the example used to create the official breed standard as he was considered the ideal specimen of a drover’s dog.

Wait, it gets better.

In another big surprise, a few drovers and shepherds situated north of the country who had been astonished by the herding style and work ethic of the Bouvier des Ardenne began a breeding program from a line transplanted there around 1930.  It was only in 1996 that the line was discovered by the official cynophile authorities!

What a marvelous story for a breed that was likely developed in the 17th or 18th Centuries.  The breed that had been recognized by the Belgian Kennel Club in 1923 was now recognized (in 1963) by the FCI which published the Bouvier des Ardennes’ breed standard in 2002; the United Kennel Club recognized the breed in 2006.

You would not be the first to have the impression of similarity in appearance between the Bouvier des Ardennes and the Berger Picard, but we’ll save that discussion for another time.

4 thoughts on “The *Other* Bouvier”