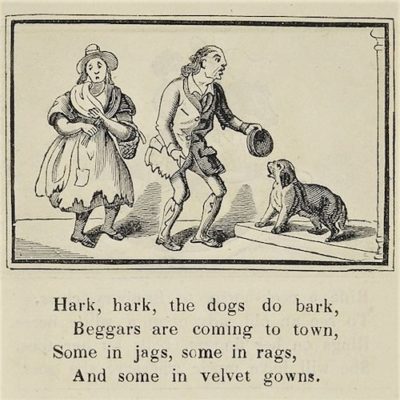 Using dogs to make a political point has been a time-tested tool, and an unfortunate one. In 1914, the lithograph “map” seen below of Europe was designed by an unknown employee of Johnson, Riddle & Company which published it at the beginning of WWI. The “dogs of war” have literally been let loose, different breeds representing European countries and about to get into a dog fight. 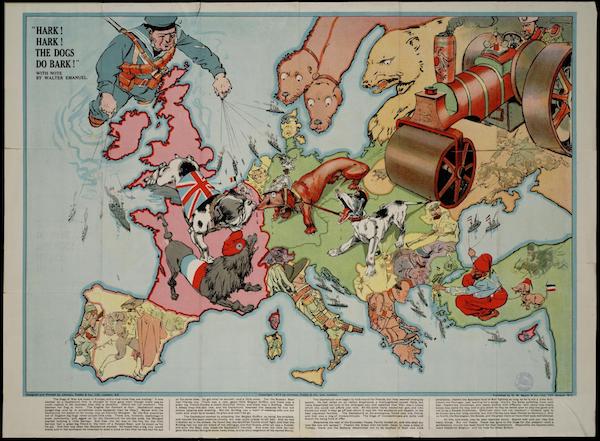 It was, in present day sensibilities, stereotyping. A British Bulldog bites the nose of Germany who is a Dachshund, and in a reference to Austro-Hungary’s volatile ethnic fault line, Austria-Hungary is portrayed by a whining mutt. Wearing a Phrygian cap (a symbol of the French Revolution) is a Poodle, despite the fact that the breed originated as a duck hunter in Germany.

The map was given the title of an English children’s rhyme:

Hark Hark the Dogs do Bark

The beggars are coming to town
Some in rags and some in jags*
And one in a velvet gown.

Jags, by the way, was a slit in a garment exposing material of a different color

The text filled with dog related puns was written by British attorney and humor writer for a Punch magazine, Walter Lewis Emanuel,  shared his take on the political situation in Europe. It began with the line, “Dachshund that is thought to have gone mad,” and makes mention of the Great Dane and Italian Greyhound. In his last paragraph, Emanuel concludes, “Peace has gone to the Dogs for the present–until a satisfactory muzzle has been found for that Dachshund.”

Interestingly, the map was copied and released in Germany as an example of British propaganda.

Clever as it was, these stereotypes endured and lead to the renaming of a few breeds, as well as their decline in numbers, and worse were incidences of rock throwing, and other acts of cruelty leveled towards dog breeds because of their association with specific countries.