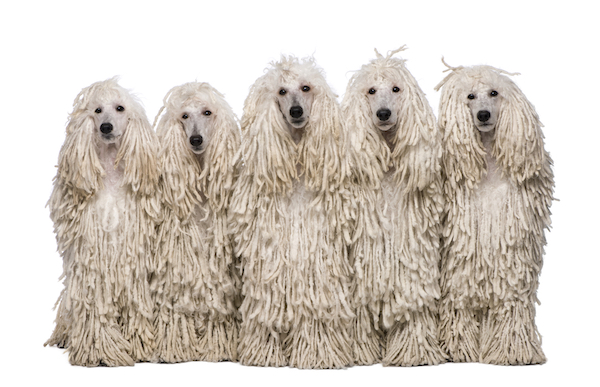 It comes as a surprise to a few people outside the dog fancy that corded Poodles are not new. In the 1800s, a top winning dog in England was a corded Poodle named, “Achilles.” In fact, Achilles was the first Poodle to earn a championship in England.

The Kennel Club of England had registered its first Poodle in 1874,  and the breed standard set by the Poodle Club in England in 1886 made mention of the corded coat: “Coat: Very profuse and of good texture; if corded, hanging in tight even cords.”  Around this time, Poodles of all sizes and coat types were shown in the same classes, though corded Poodles were exempt from English Kennel Club rules that applied to the preparation of dogs for exhibit in the 1800s. We suspect this was in reference to a rule still in place today about applying a foreign substance to a dog’s coat, or altering its appearance by artificial means. In the 1800s,  it was thought necessary to oil the cords of a corded Poodle, or even apply vaseline to it (Vaseline was invented in 1872) because coats were more brittle, and thus, corded Poodles got a free pass.

Sometime between 1903 and 1906, Poodles in the UK were divided into corded and non-corded divisions at dog shows. Early writers treated the curly coated Poodles as separate from the corded varieties as evidenced by what they wrote. One author credited Russia with the origin of the corded Poodle, but Dr Fritz Inger, a German authority, believed the Poodle originated in Africa, either in Morocco or Algiers, and that the corded varieties had a Spanish, Portuguese or Greek origin.  Little wonder, then, that there were those fanciers who believed that corded Poodles were purebreds, all else were cross-breeds.

Hardly a “European thing,” some corded Poodles did come to the United States to exhibit at dog shows in the 1890s, but they 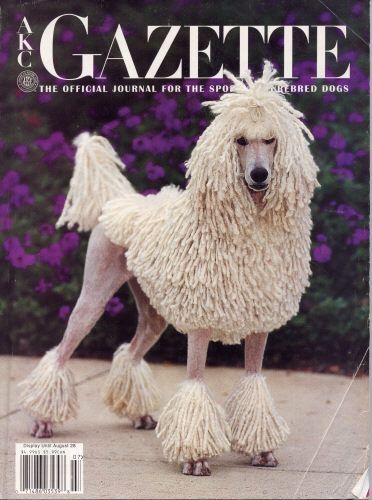 weren’t as popular as their curly coated counterparts and never caught on. That said, there is poor information about corded Poodles even today. We came across this gem: “Some corded Poodles aren’t given baths to avoid the tangling of the coils. Given all these complications to keep the coat clean, corded Poodles almost always smell and are constantly dirty and greasy; they also have a tendency of housing insects. “

There was nothing unpleasant about the gorgeous dog that graced the cover of the July 2000 issue of AKC Gazette, a Poodle named “Carley,” aka Ch. Somerset Sweet Success owned by Charla Gordon and shown by Dennis McCoy.

A corded Poodle is no different from a Puli or Komondor with regards to coat care. A dirty long coated dog will smell, a clean one won’t. They are bathed in soapy water, and the cords don’t “untangle.” Furthermore, the only insect we ever found in our corded dog’s coat was a Volkswagon Beetle matchbox card that got tangled up in a cord.

6 thoughts on “The Corded Poodle: Not So New”