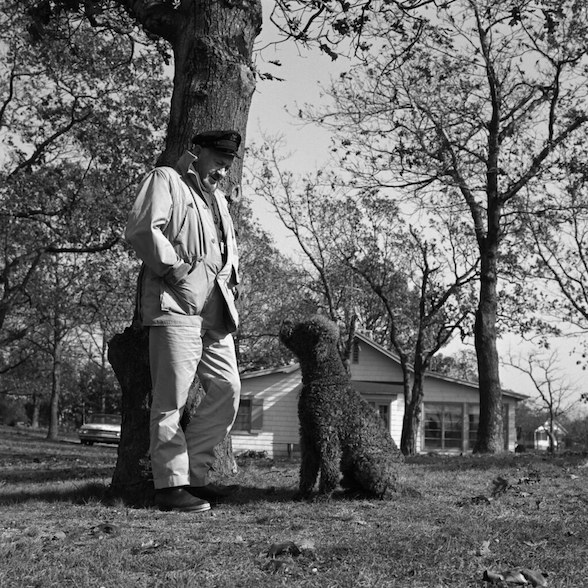 “I’ve seen a look in a dog’s eyes, a quickly vanishing look of amazed contempt, and I am convinced that basically dogs think humans are nuts.” –  John Steinbeck

Not surprisingly, Steinbeck lived with a Poodle, and he may formed this opinion on the basis of that fact alone. Poodles, that breed par excellence, may be unrivaled in decimating a person’s self esteem with just one glance. Steinbeck would have had ten years of evaluating Poodle expression. His “blue” Standard Poodle,  Charley, was ten years old when he accompanied Steinbeck on his journey across the country in the fall of 1960 “in search of America.”  The now famous book that resulted was Travels with Charley: In Search of America.

Charley, whose full name was Charles le Chien, had been born and raised in a Paris suburb and responded only to French. By Steinbeck’s account, Charley was a practiced traveler who loved road trips. Together, they trucked along in a three-quarter ton pickup truck topped with a camper top that had been “tricked out” with anything they might need on the road (RVs as we know them today were rare back then). The truck was named “Rocinante” (after Don Quixote’s horse), but poor Charley was evidently frantic during the packing of it, probably worried that he was being left behind. Steinbeck wrote, “During the weeks of preparation he was underfoot the whole time and made a damned nuisance of himself.  He took to hiding in the truck, creeping in and trying to make himself look small.”

Don’t we all know a dog that has done that as we prepare for a trip?

Charley was described as a fine companion and an even better ice-breaker when the pair met folks on their trip that went from coast to coast through 34 states over three months.  Fanciers who travel to dog shows might like this next bit that describes Charley’s mornings:

“Charley likes to get up early, and he likes me to get up early, too.  And why shouldn’t he? Right after his breakfast he goes back to sleep.  Over the years he has developed a number of innocent-appearing ways to get me up.  He can shake himself and his collar loud enough to wake the dead. If that doesn’t work he gets a sneezing fit. But perhaps his most irritating method is to sit quietly beside the bed and stare into my face with a sweet and forgiving look on his face; I come out of deep sleep with the feeling of being looked at.  But I have learned to keep my eyes tight shut. If I even blink he sneezes and stretches, and that night’s sleep is over for me. Often the war of wills goes on for quite a time,  I squinching my eyes shut and he forgiving me, but he nearly always wins. He likes traveling so much he wanted to get started early, and early for Charley is the first tempering of darkness with the dawn.”

Over the years, some readers have felt that this was Steinbeck’s weakest work, a self indulgent stream of consciousness ramblings. Others – dog owners – have liked it.

As for Charley, he passed away not long after the completion of the journey in 1961. He is buried on the grounds of the Steinbeck’s Pacific Grove cottage in Monterey County, California.

Steinbeck’s account of his road trip took a hit in 2013 when Bill Steigerwald wrote a piece called, “Travels Without Charley.” It should have been subtitled, “Travels With Charley: A literary fraud filled with fiction and lies,” and if you care to read the piece, it’s here.

We choose to conclude with another Steinbeck quote about Charley: “Sir, this is a unique dog. He does not live by tooth or fang. He respects the right of cats to be cats although he doesn’t admire them. He turns his steps rather than disturb an earnest caterpillar. His greatest fear is that someone will point out a rabbit and suggest that he chase it. This is a dog of peace and tranquility.”

4 thoughts on “He Does Not Live by Tooth or Fang”