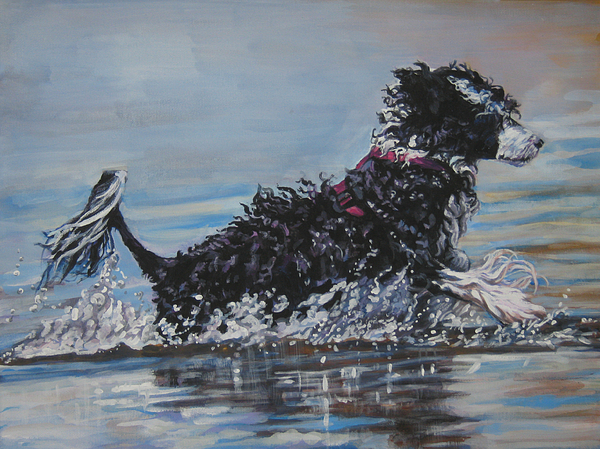 Herding fish seems as farfetched as herding cats, but we know of two dog breeds that did just that. The Fuegian Dog of Chile was said to be able to control the movement of shoals of fish into nets, but we may never know with certainty since that dog is now extinct.

The other breed is alive and well and was first written of in 1297 when a monk wrote a report of a dying sailor who’d been tugged out of the sea by a dog which had a “black coat of rough hair, cut to the first rib and with a tuft on the tip of his tail.” Today, we call that clip on a Portuguese Water Dog a “lion clip” which was entirely functional in helping reduce drag on a dog that carried messages between boats, retrieved lost gear and broken nets out of water, and yes, herded fish into nets.

Known in his homeland as the Cao de Agua (dog of the water), the Portie served as a fishing crew member even on trips from Portugal to Newfoundland.

There may not be as much call to herd fish as there once was, but comic, Don Novello (also known as Father Guido Sarducci on The Smothers Brothers’ Show and Saturday Night Live), came up with an idea that “struck home” for a couple of years.  In 2002, the Pacific Bell Park (now AT&T Park) became a stadium famous for its “Splash Hits” which happened when a batter hit a home-run that landed in the San Francisco Bay. A team of six Portuguese Water Dogs known as as B.A.R.K. (Baseball Aquatic Retrieval Korps) retrieved the balls by swimming into the bay, spotting the balls (baseballs bob in water in a unique way), and bringing them back. The balls became popular collectors’ items and money raised went to pet charities.  The B.A.R.K. team was retired when boaters threatened their safety.