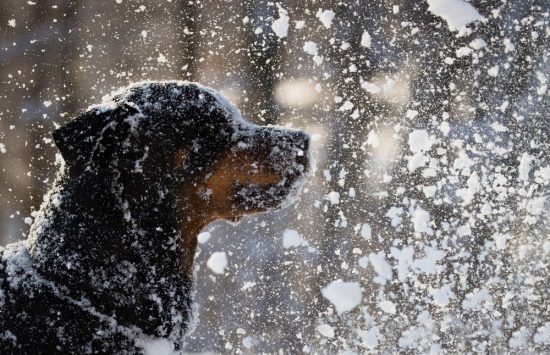 Check out the video below. It’s not the intact tail that Americans don’t much see on a Rottweiler every day. It’s something else. Oh heck, see if you notice it, yourself:

You spotted it, didn’t you.

It’s a cat….no, a Panther (!) playing with a Rottweiler.  That’s “Luna,” a Panther born in a traveling Siberian zoo, but who was rejected by her mother as a cub. When the zoo was unable to look after her, Luna was adopted by Victoria, a Russian woman with previous big cat experience. Victoria raised Luna alongside her Rottie, “Venza.” The two are now great friends, but it’s understandable if while watching them play, you gasp a little here and there.  Panthers are lightening quick, have wicked strong jaws, and powerful paws with sharp nails. They are big kitties. Predator kitties.

It started out with the pair drinking from the same water bowl. Soon, Luna was rearranging a shared blanket, and pretty soon, she was cleaning her older brother’s coat.

It was legal to keep exotic pets in Russia until an animal-protection law came into force in January 2020, but if the owner acquired the animal before January 2020, they’re allowed to keep it. Victoria has gotten her share of criticism from animal rights people who feel she should set Luna free, and individuals who insist that exotic pets are a bad idea. Others point out that freedom is not an option for an animal born in Luna’s circumstances. Probably everyone can agree that a traveling zoo is not the best situation for a panther.

You can see more photos of Victoria, Luna and Venza here.