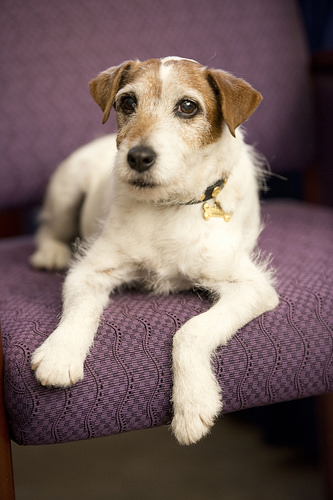 One day in 2002, animal trainer, Omar von Muller, got a call from a friend about a dog about to be surrendered to a pound. He’s driving the family crazy, the friend said. He’s naughty and chases the cats and is hyperactive and he’s bitten a goat in the garden. Omar said, “Hold the dog for me, I’ll come get him.”

Von Muller had to be glad he did.

In 2011, the Jack Russell Terrier won the canine equivalent of the Oscar by garnering a Palm Dog Award at the Cannes Film Festival. Dog News Daily awarded him its first Golden Collar Award for Best Dog in a Theatrical Film, and after that,  he became the first dog to make his paw print on Hollywood’s Walk of Fame at Grauman’s Chinese Theatre. He had roles in 2005’s Wassup Rockers and 2006’s Mr Fix It, before landing a bigger part in 2011’s Water For Elephants, starring alongside Reese Witherspoon. His role as “Jack,” in The Artist, however, made him Hollywood’s Top Dog after the film won five Academy Awards, including Best Picture and Best Actor.

We can only be writing about Uggie, a typically busy Jack Russell Terrier. His trainer, von Muller, would later write that Uggie was an easy dog to train with positive rewards because he would eat anything. He was fearless and focused, and offscreen, his “signature move” was to lick people’s faces. Until his death from prostate cancer in 2015 at the age of 13, Uggie spent his final years enjoying his retirement from acting. He slept late, relaxed around the house he shared with his owner, von Muller, went to the park with his seven “siblings,” and relished pancakes.

Uggie lives on in his movies. Watch the five minute clip from The Artist below and see why some Uggie fans started a “Consider Uggie” campaign urging awards voting members from the Academy and Bafta to recognize the four legged thespian: