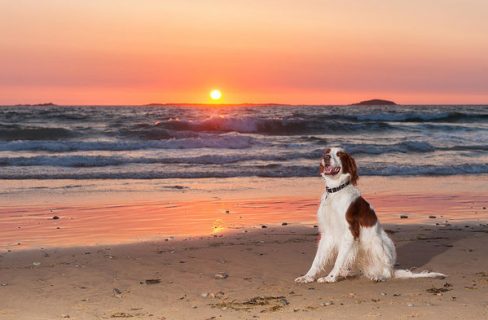 The Reverend Noble Houston, while a man of the cloth, was by most standards, a colorful character. An army chaplain in the 1914-1918 war, he came home after the conflict and was often spotted riding his motorcycle around Ballynahinch, County Down, Northern Ireland, with an Irish Red and White Setter perched on the back, the dog’s paws on his owner’s shoulders. Houston, nevertheless, is an important figure in the breed’s history because it was Houston’s 50 year long interest in the breed that very well may have saved it from vanishing forever. Litters he whelped when he bred his “Gyp” to a stud named “Johnie,” and later to a descendant of a line of IRWS traceable to more than 200 years, are regarded by some as the resurrection of the breed.

We can’t know with certainty why the breed is called the Irish Red and White Setter, and not the Irish White and Red Setter, but in a letter written by him to a Miss Clark in 1941, we learn the Rev. Houston’s sentiments on the matter. He wrote, “The ideal is, of course, more white than red. Mr. Gillespie, I think it is, who suggests the the breed should be called white and red to show that there should be more white than red, but this is to invent a new name for an old breed.” Houston added in the same letter, “Two hundred years ago, they were Red and White Setters, no matter which colour predominated…”

Such comments matter, at least to those curious about dog breeds, because while the Irish Setter may be the better known of the setters from Ireland, it is, in fact, the younger breed. The IRWS was always bred primarily for its working ability, but the Irish Setter’s solid red color evolved through selective breeding. By the end of the 18th century, all-red Setters began to appear in Irish kennels, and by the end of the 19th Century, the Red Setter had virtually eclipsed the Red and White in number. Irish Red and White Setters had become so rare that the breed was thought to be extinct, and while it was close, it hadn’t disappeared entirely. There were a few IRWS living in Monaghan, dogs highly regarded for their prowess in the field.

Rev. Houston gathered pedigrees on setters dating as far back as the 1790s, and while he wasn’t the only breeder of Irish Red and White Setters in Ireland in his day, his records are the only ones that survived. To our amusement, the reverend didn’t record specific pedigrees on his dogs, but he did document litters that he bred in the parish registers. Letters such as the ones exchanged between Miss Clark and Reverend Houston help offer clarity to how things stood at the time.

Today, the breed standard indicates that the base color of an Irish Red and White Setter is white with solid red patches, and we have Reverend Houston’s 76 year old letters to validate it. It occurs to us how often members of the clergy have had a hand in purebred dogs.

Image: “Banan At Sunset” (an Irish Red & White Setter at sunset on Tra na Rosann Beach, Downings, Donegal, Ireland) by Rita Wilson is available as a print and poster here.

One thought on “The Reverend and the Setter”