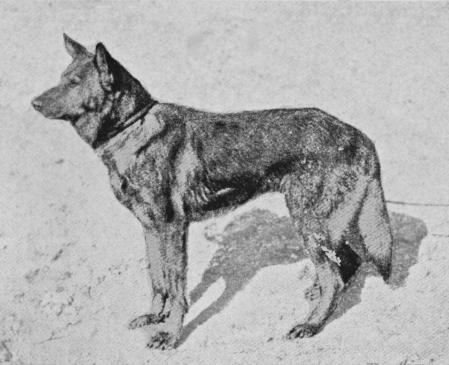 German history had its ebbs and flows of national pride, but what never wavered was an embedded tradition of dependable, strong working sheepdogs and guardians. During a high point in the 19th century, an effort was made to categorize the different types of German breeds by name, dogs that had evolved to have different characteristics depending upon where they were in Germany. The Phylax Society was an early club that was organized to create standards and organize these native breeds. Sadly, infighting in a dog club is nothing new, and it wasn’t back in 1891 when the club split between people who favored breeding for working abilities, and those who bred for the show ring (sound familiar?).  The club fell apart, but a former member, Max von Stephanitz, never lost sight of his goal to create a distinct working dog using German breeds. His dream was given a boost by a sheepdog he saw at a dog show in western Germany. The dog had wolf-like features that appealed to von Stephanitz, and he wasted no time in purchasing the dog, naming him Horand von Grafrath, and making him the foundation of his breeding program. Horand was named the first German Shepherd Dog, and thus was also the first added to the breed registry.

Image of Horand von Grafrath along with comments on him by Captain von Stephanitz are from the fascinating site, pedigreedatabase.com