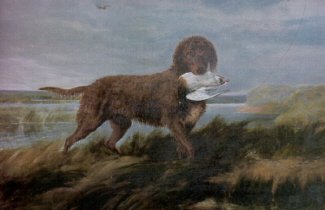 Not every breed we mention on NPDD is a dog one will ever find in the flesh. Some breeds fell into the cracks of history through neglect, war, lack of interest, taxation, absorption into another breed, or poor breeding. A few died out before having much impact. Others, such as the Tweed Water Spaniel, were able to influence breeds that came after them, only to go extinct, themselves. We think these extinct breeds are worth mentioning not only to mention their mark on modern breeds, but to remind us all that extinction isn’t something that happened in the past. In 2013, Stanley Coren felt that of the total number of dogs registered by the AKC, over half were accounted for by just 10 breeds (this continues to be subject to debate). England’s Kennel Club list 29 breeds of British origin that are considered to be vulnerable in their country of origin, and another 11 are under watch.

We can thank the athletic Tweed Water Spaniel for today’s Golden Retriever. This adept swimmer and waterfowl hunter was found in the region of Berwick-upon-Tweed, close to the River Tweed near the Scottish border. Some cynologists suspect the breed was a result of crossing local water dogs with the Water Dog San Juan (also extinct).  Linda P. Case (University of Illinois) however, wondered if the Tweed Water Spaniel wasn’t the dog developed on the estate of Lord Tweedmouth that later became the current Golden Retriever. By most accounts, the dogs were described as generally brown, athletic water dogs, “certainly retrieverish, and not at all spanielly.”