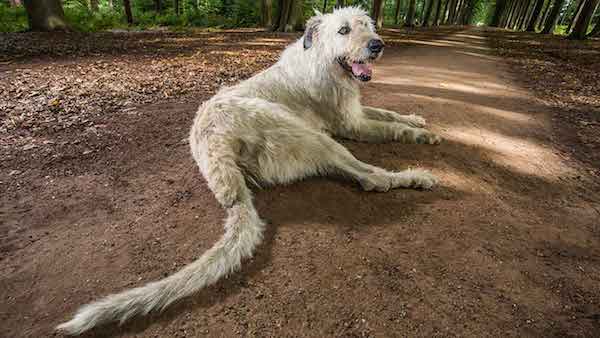 The Beagle’s AKC breed standard describes a tail that is “too long” as being a defect, but what is too long? Beagle owners tell us that when a Beagle stands at attention, his tail length should be slightly higher than the crown of his head, but if one doesn’t have access to a Beagle owner, how does one tell? In this instance, we think the FCI’s standard is a bit more helpful because it adds the adverb, “moderately” to the word, “long.”

The Borzoi’s breed standard is equally vague: “Long, set on and carried low in a graceful curve,” as is the Scottish Deerhound’s which calls for a “tolerably long” tail. Again, what’s too long, and what’s tolerable?

The AKC’s Judge’s Study Guide on the Borzoi does a nice job of describing common tail faults in the breed: A gay tail carried higher than the topline, a curly tail (which spoils the graceful flow of the outline) and a ring at the end of the tail which reduces the visible length – but again, what length is the right length?

Add the Grand Basset Griffon Vendéen, Whippet, Saluki, Irish Wolfhound, Harrier, Greyhound, as other hounds that should have a long tail –  but is “long” is in the eye of the beholder, and if the dog appears to be balanced, the tail must be the right length?

A few AKC hound breed standards are a bit more helpful; the American English Coonhound’s tail is “medium length, as is the Redbone Coonhound’s, while the standards of the Azawakh, Ibizan Hound, Otterhound are even more specific: The Azawakh tail’s length “should reach the hock,  the Otterhound’s tail should reach “at least to the hock, and the Sloughi’s tail is long enough to reach the point of the hocks.

We don’t mean to pick on the breeds whose proper tail length is unspecified, but students wanting to learn about other breeds sometimes need a little more guidance. How do you determine when a tail is too long or too short when the standard doesn’t address it?

Image of “Keon,” an Irish wolfhound who in 2017 held the Guinness World Record as having the longest tail on a dog: An impressive 30.2 inches in length (before achieving the record, Keon was required to be examined by a veterinarian who measured the tail from the top of the bone to the tip – not including the hair).