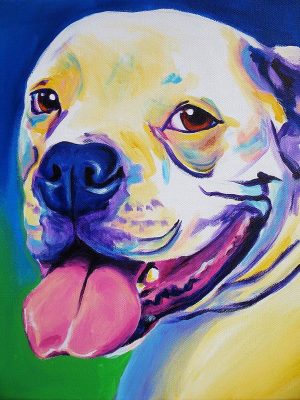 While theories abound as to how the Old English Bulldog arrived in America, it’s probable they were brought to the New World by British settlers. Releasing cattle and hogs in Florida and Texas to provide food and leather for future colonists must have seemed like a good idea at the time to 16th century settlers, but over the years, the creatures grew tusks, returned to a wild state, and not only became highly aggressive, but an agricultural nightmare to farmers who would see a year’s worth of crops destroyed in a night. It was the Old English Bulldogs who were given the job of hunting and catching the destructive animals until they could be dispatched by a farmer or rancher. The canines became known as the only dogs living in the country able to hunt feral hogs and cattle without a high probability of dying in the process.

World War II saw the breed on the verge of complete extinction in the United States.  Were it not for native Georgian, John D. Johnson, it might have died out altogether, but Johnson had fond memories of his first American “Pit” Bulldog, “Prince,” and started breeding at the age of 14.  He continued breeding Bulldogs until he entered the service during the war, and entrusted his dogs with his family until he returned. When that day came, Johnson saw that the breed he so loved was in dire straights. Determined to save the American Pit Bulldog, he gathered the finest surviving representatives of the breed that he could find, and eventually, with the help of Allan Scott, reconstructed the American Bulldog. A fall out between the two resulted in two distinct breed types that exist today: The “Johnson type,” a heavier dog with a shorter muzzle and more traditional Bulldog look, and the type Scott preferred,  a more athletic,  longer-snouted dog now known as the “Bully/Classic” or “Standard.”

Whatever the type, the American Bulldog is one of the most popular breeds in the country because of its “big lapdog,” or “gentle giant” personality. As an aside, “Chance,” from the movies, Homeward Bound: The Incredible Journey (1993) and the sequel, Homeward Bound II: Lost in San Francisco (1996), is an American Bulldog. The breed is recognized by the United Kennel Club. You can read the breed standard and see illustrations of the two different types here.

One thought on “How to Irritate American Bulldog Owners”