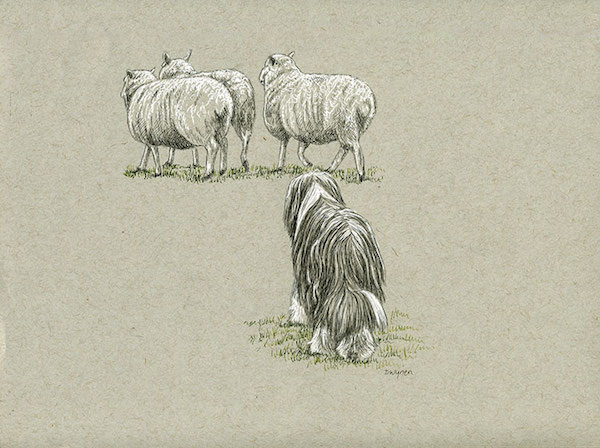 The New Zealand Huntaway was created in the 19th century for one specific reason: To round up massive flocks of sheep (and we do mean massive) on the terrain of New Zealand. These dogs could head and hunt, force sheep into pens and backing, but also work them in yards and woolsheds. Since sheep stations and farms were quite large in this country, quiet communications between dog and shepherd were useless, so the Huntaway was bred to have a loud, deep bark that could be heard from miles away. This let the farmer know where the flock was, what the dog was doing, and from the type of bark, probably why the dog was doing what he or she was doing. Huntaways cast out in vast areas and used their bark to locate and flush sheep from hilly terrain and hiding spots. The breed is so successful that it is regarded by many New Zealanders to be the consummate herding dog, and it is their ability to use their bark for herding, rather than relying on sight alone, that sets the breed apart.

While “huntaway” is the name of a breed, it is also a style of herding. As you would expect, a dog employing a huntaway herding style uses its bark to locate, flush, and gather sheep back into the flock. One breed that comes to mind as an exemplar of this style of herding (besides the New Zealand Huntaway, that is) is the Bearded Collie.

To our knowledge, it wasn’t until the early 1900s that any effort was made to standardize the Bearded Collie, and that document was more of a working standard than one of conformation. In Scotland, Beardies were commonly used as “huntaway” herding dogs, and the current AKC Judges Study Guide for the breed reiterates that historically, Beardies worked with a “ringing bark and ‘huntaway style.'” This huntaway style is still evident in Beardies today.

Bearded Collies often worked in thick underbrush on hillsides, and to catch sight of the sheep, they quite literally bounded – or bounced – up upwards to spot them.  This is a Beardie’s very characteristic way of facing a stubborn ewe: Barking and bouncing, moving stock with the body, and barking and bouncing as needed. Very few Beardies show “eye” when working and most are upright workers, but it is this “sonar” type of herding-by-barking that makes the Beardie a “huntaway” type of worker. This kinetic method of spotting sheep also lead to the breed’s nickname, “bouncing Beardie.”

Image: From 2016, “Day 28 – Beardie Herding Sheep,” by the marvelously talented Diane Wynen/wyndian.com. Though the original is sold, prints are available here.