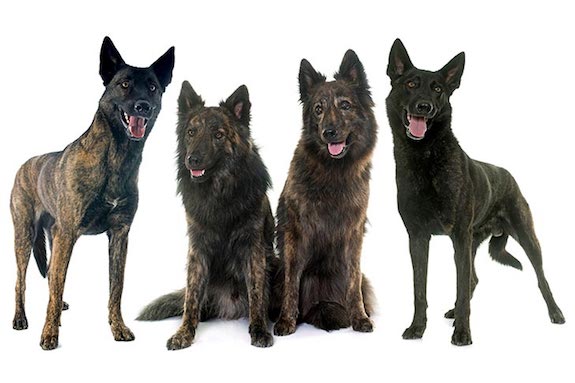 The Dutch Shepherd continues to fly under the radar among most of the public, but not with law enforcement and the military. The breed routinely shows up among the top five breeds used by both. Since 1907, Dutch Shepherds have been trained by the Royal Dutch Police Dog Association, and the KNPV Dutch Shepherd is the most commonly used Shepherd in their training program. In 2019, two Marine Corps K-9s who earned the highest honor available for military working dogs were Dutch Shepherds, Troll and Niko. That said, the breed is truly versatile and can seemingly do it all.

There are three varieties of Dutch Shepherd determined by coat type. In the Netherlands, they are called Langhaar Hollandse, Ruwhaar Hollandse, and Korthaar Hollandse. Respectively, they are the long coat, wire coat, and short coat, and of those, the wire-haired variety is the rarest.

The Dutch Shepherd was added to the AKC’s Foundation Stock Service in 2012,  a way for rare dog breeders to maintain and share records of purebred pedigrees and names of dog owners. It is currently in the Miscellaneous Class. This is a welcomed step for a breed that faced extinction during the 1940s and 1950s. Increased use of machinery in modern farming led to a lack of demand for the Dutch as a working dog, but World War II also had slowed down breeding programs in the Netherlands, a time when many dogs also died from a lack of food. Following the war, a breeding program was put in place in an attempt to increase numbers of this breed.

The breed is in much better shape now as people discover the Dutch Shepherd’s attributes as a loyal companion, able working dog, and athletic participant in dog sports.

Image appears here with the consent of the AKC