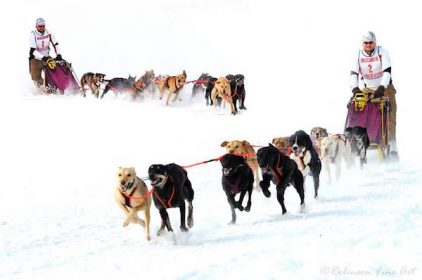 Joar Leifseth Ulsom of Norway has won the Iditarod 2018, adding the win to his other record as the fastest rookie to have ever run the Iditarod, and one of only two mushers to place top-7 five times in as many Iditarod starts. He and his eight-dog team (led by 3-year-old Olive and 4-year-old Russeren) crossed the finish line after 9 days and 12 hours on the trail, making Ulsom the first non-native winner of the “toughest race in Eurasia” in 20 years. Whatever else you think about mushing or this race, we think it’s worth sharing a few interesting factoids: 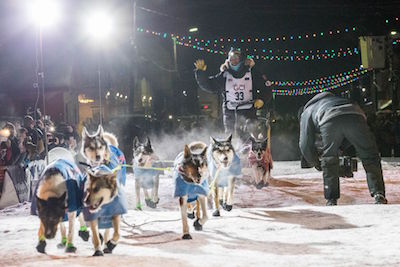 In the late 1980s and early 1990s, musher, John Suter, ran dog teams that included Poodles!  The Poodles ran better when they had Husky teammates, and while they didn’t win a lot of races, the partly Poodle teams competed in the Iditarod from 1989 to 1991, and even managed to place ahead of twelve husky teams one year. Iditarod race rules now mandate that “only dogs suitable for arctic travel” are permitted to enter the race;

Alaskan Malamutes are one of the oldest breeds of sled dog, and are native to Alaska’s Arctic, but the breed isn’t built for speed, it’s a freight dog, and Iditarod mushers don’t use them in the race;

One choice for many sprint mushers is the new “Eurohound,” a cross between an Alaskan Husky and German Short haired Pointer. These dogs first successfully entered the competitive world of sled dog racing in Scandinavia. It’s one of the most formidable racing dogs in the world today, combining the husky’s sledding ability with a pointer’s enthusiasm and athleticism. The dogs seen in the picture at the top of the page are “Eurohounds.”

The ultimate racing machines just might be Alaskan Huskies. Are they their own breed?  Not now, they’re not.  Coastal Eskimo Dogs, and the Alaskan Interior Village dogs are the two largest groups of native dogs that make up the base of the Alaska Husky, but Malamute, Siberians, German Shorthaired Pointers, Salukis (!) and Anatolian shepherds were once part of the mix. These days, the main breeds used in developing Alaskan Huskies include the Eskimo dog, Siberian Husky, Greyhound, and German Shorthaired Pointer. Will the Alaskan Husky ever be its own breed? Who knows, but we doubt the mushers care because their dogs are defined by purpose. Vet Street lists the Alaskan Husky as the 7th fastest dog in the world; in fact, they’ve been recorded traveling at 28 mph! While Siberian Huskies are often used in shorter distance races, Alaskan Huskies are preferred for longer distance races because they are famously extreme endurance runners. For this reason, they are known as the ‘marathoner of dogs.”

Insert photo of Joar Leifseth Ulsom and his sled dogs by Loren Holmes/ADN) can be purchased here.