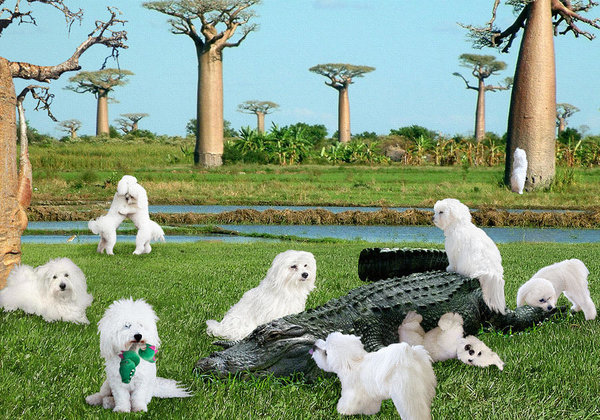 Overseas, the Coton de Tulear is known as the, “anti-stress dog of the 20th century” for its clownish, happy-go-lucky demeanor. Famous for cocking his head to the side as he’s being talked to (and sometimes responding with unique vocalizations), the Coton makes it tough for an owner to be in a bad mood.

That said, it would be a mistake to interpret the Coton’s easy-going nature as a indicative of an easy-going intellect. Cotons are quite intelligent, if not a bit notorious for solving problems on their own. It’s said that one must be careful what one teaches to a Coton because the dog is apt to run with it and use it in inventive ways the owner had never thought of.  To underscore this aptitude, we share a folktale about the breed.

As the story goes, ancestors of today’s Coton arrived in Madagascar during the early 1400s when the vessel they were on shipwrecked. The dogs were the only survivors. Somehow, they swam to shore, and eventually made the dense forest of the island their new home. They learned to survive, and in the process, became a bit wild themselves. On the occasion that one particular pack of Cotons wanted to cross a river infested with crocodiles, they relied on their wits to do it safely. Some of the dogs ran to the widest part of the river and lured the reptiles there by barking ferociously (put another way, they were talking smack to the Crocs). When the crocodiles reach the spot where the dogs were barking, the Cotons sprinted back to the narrowest part of the river and crossed it before the hungry Crocodiles could swim back. We’d guess the moral of the story is that when crossing a predator-infested river, have a couple of Cotons with you.