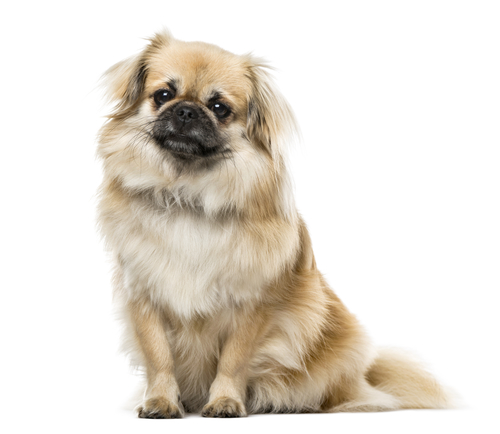 Spirituality was as important to Buddhists as the air they breathed, and Buddhists monks fully believed that any human being could be reincarnated into a dog like the a Tibetan Spaniel with whom they lived.

In their homeland of Tibet, the breed is known as “Simkhyi,” which translates to “dog that lives in the bedroom,” “house dog” or “room dog.”  This is a bit at odds with the roles that Tibbies played in the daily lives of the monks with whom they lived.  Hardly ferocious guard dogs, they nonetheless acted as lookouts on the stone walls of monasteries where they sat and barked, “incoming!” when anyone approached, and usually to the the Tibetan Mastiffs standing below the wall.

“Not for nothing” is the breed is described as part terrier, part monkey, and part cat. Their dexterity is often compared to that of a cat  (in fact, some Tibbies have been known to open doors and even purses), but their knack for climbing onto higher surfaces make them monkey-like. Their inclination to sound the alert at any little thing, of course, suggests a terrier-realm, but they’re no more a terriers than they spaniels. It’s possible that the “spaniel” part of their name comes from the Middle Ages when the French word, “epagneul,” described their role as a “small comforter dog.”

This terrific little breed isn’t as well known as it might be – and we invite owners to share pictures of their Tibbies!