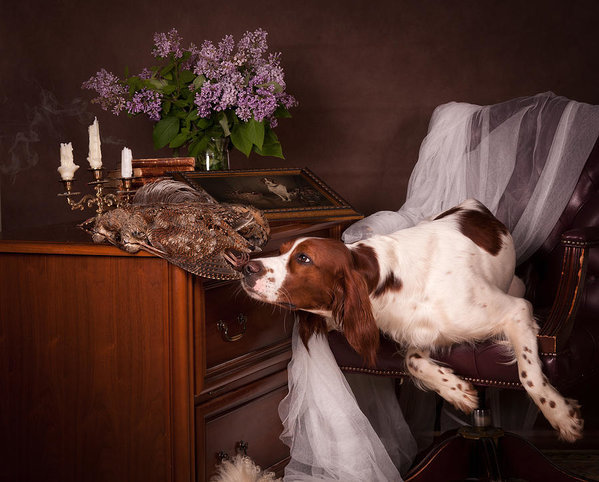 What magnificent creatures are setters! In the field, they carry their head high to ‘triangulate” the scent of game in the air. Then they quarter a field much the way a crime scene investigator works a grid – methodically and systematically. When the location of the game is determined, a setter “shows the way” with its characteristic point, usually in a low crouched position. Is this not a marvel of nature?

Early in Ireland’s history, all “setting” dogs were called Irish Setters, regardless of color, though most were red and white, all red, or nearly all white. The dogs were interbred, but by the mid 1800s, there seemed to be a marked inclination towards the all red dogs. As a result, the Irish Red and White Setter, actually the older of the two setters, suffered a serious decline in numbers, so much so that some thought the breed extinct. Were it not for the Reverend Noble Huston, beekeeper, minister of the First Presbyterian Church in Ballynahinch, County Down, and dog breeder,  the Irish Red and White Setter may very well have vanished altogether.  A Chaplain in the army during WWI, he came home after the war and noted that almost all good Red & White Setters were gone! The good Reverend bred his bitch, “Gyp” to a certain Mr. Evatt’s “Johnie,” and then through his connections with the Rossmore family, he later bred Gyp to Glen of Rossmore. The Rossmore line of Irish Red and White Setters could be traced back more than 200 years, and it is these litters that are often identified as the revival of the Irish Red and White Setter. It wasn’t 1984 that the Irish Kennel Club officially recognized the breed, the FCI not until 1989, and finally in 2009 came acceptance by the AKC.

One thought on “Ireland’s Early Setters”