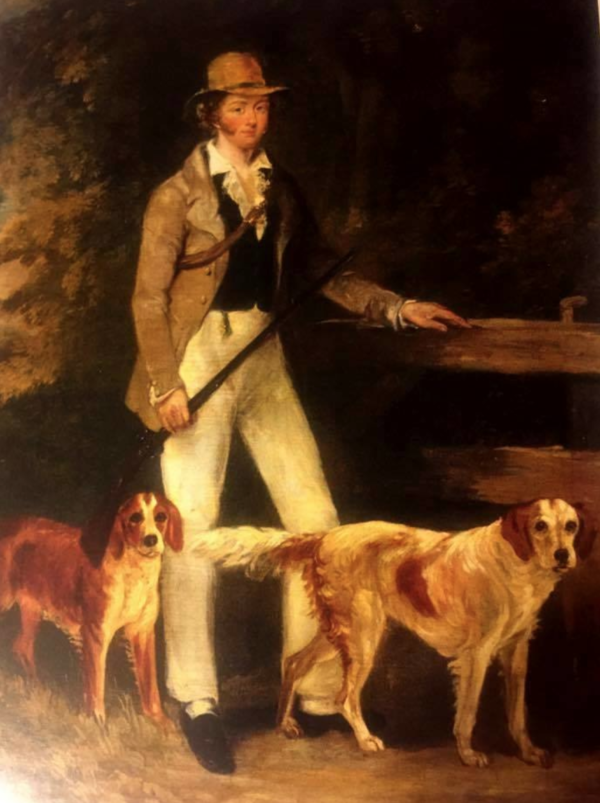 The Rossmore family of Ireland included Members of Parliament, dukes, and barons, but for our purposes, we cite their ownership of the same breed for nearly 300 years. The strain of red and white dogs they kenneled at Rossmore Castle in County
Monaghan is to this day still sometimes called the Rossmore Setter, a breed said by some to have been reserved for ownership only by Landlords and not “the people.” Since the family also had grounds on the Island Arran on the English coast where they hosted shootings, the dogs were also called Arran Setters. That said, the Rossmore strain entered the 20th century with Captain A. M. Stewart of Donegal keeping a kennel.

Today, we know these dogs as Irish Red and White Setters. The breed predates the Irish Setter which was actually a bit uncommon those days. Interbreeding of the different colors did take place during this period, but that gradually changed as sportsman and breeders started to plan matings that would produce dogs adapted to the terrain on which they would be working. For field work on the moors and mountains, a red and white dog was regarded as a better choice than the deep, bright red of the Irish, a color hunters found difficult to discern amid the brown heather of the hillside.

It was only at the turn of the 19th century when dog showing was introduced that the Red Setter gained popularity over the IRWS. As late as 1875 at a conformation dog show in Dublin, 66 Irish Setters were entered, and only 23 of them were red and white (at the time, both were considered to be simply “Irish Setters”).  The following year, an entry of 96 Irish Setters was recorded at a dog show in Cork, and a mere 36 were red and whites. The preference for solid colored red setters had begun, as had the decline in red and white setter numbers. The Irish Setter’s popularity traveled across the pond to America where high prices could be asked for a red setter, and had it not been for a smattering of devoted breeders in Ireland,  the Irish Red and White Setter might have been pushed to extinction. Happily, this was not the case.