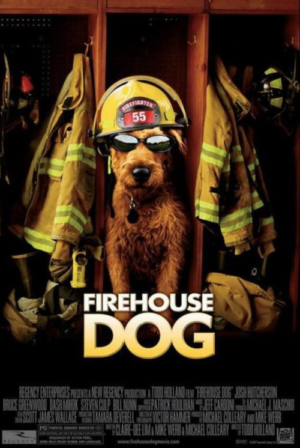 Need more?  Ok, so this TV canine movie star named Rex goes missing, takes shelter in an apartment that catches fire, and jumps into the arms of a fire captain to save his own life, but losing his trademark hairpiece in the process. Original owners then want the dog back.

If it sounds familiar, then you’ve likely seen the 2007 20th Century Fox movie, “Firehouse Dog.” With the greatest respect to the actors, none were names that most of us would recognize, but around here, we pay attention to the dog star, anyway, and in this movie, it was played by not one, but by four different Irish Terriers named Arwen, Frodo, Rohan and Stryder (yes, they were named for characters and places in The Lord of the Rings). “We got these dogs specifically for this movie,” said dog trainer Ursula Brauner (Boone’s Animals for Hollywood). “This [was] their first ‘acting experience’ so we had to teach them everything from scratch.” Four trainers were on set to help turn four Irish Terriers into one dog character, “Rex.”

The idea for the movie was the brainchild of screenwriter, Claire-Dee Lim who contacted her old UCLA alumni chums. “Having worked with dogs on a previous project, we were struck by the irony of their portrayals in many Hollywood pictures,” said former classmate, Mike Werb.  “Dogs that perform in filmed entertainment are nothing like their on-screen characters so beloved by audiences. Another college chum, Michael Colleary, adds: “With so many rules surrounding these actor-dogs, they seemed more like workers than the dogs we grew up with. Actor-dogs can’t be touched or even looked at by anyone other than their trainers.”

The trio wrote the role of their title character, Rex, to be as strong a character as any of the human characters, and for Rex, this meant being a horribly pampered superstar with a little diva thrown in.

That was the easy part.

Finding the right breed to play Rex was tougher. Whatever breed played Rex had to be smart, agile (read: athletic), and small enough to fit inside a drum. The filmmakers consulted dog books to help them know which breeds wouldn’t work, and then narrowed the list down even further. They interviewed dogs and trainers, and ultimately chose four Irish terriers to portray Rex.

Another challenge came in finding Irish Terrier puppies for the scenes in which Rex reflects on his life as a puppy. The film crew never could find a litter of Irish Terrier puppies, so they contacted a Soft Coated Wheaten Terrier breeder to ask if they could use their litter of Wheaten puppies. Filming was in one part of Canada, but the breeder refused to travel with the puppies all the way where scenes were being shot, so the crew went to the breeder  (yeah, crew!). Ursula went, as well, and brought along a company that monitors room temperature to ensure a comfortable setting (lighting for filming can make things very warm). We can’t help but wonder how many Irish Terrier breeders saw these pups in the flashback scene and thought to themselves, “Ummmmm…”

As for the adult Irish Terriers, the stunning red heads won over the entire cast and crew. Many felt that they had bonded with the dogs – not a surprise to the people who love the breed.  It’s especially fun to see an uncommon breed cast in a movie. You can watch the entire movie on You Tube for $3.99, or you can get a taste of it from the trailer below:

President of the Irish Terrier Club of America at the time, Mike Kowalczuk, said, “It’s not surprising that the Irish Terrier was chosen to play a canine hero in the movie. This breed has long been recognized for its courage and spirit— in World War I, Irish Terriers were dispatched to carry messages back and forth between troops on the front lines. Children who show respect and kindness to their Irish Terrier will never have a better playmate. They will provide years of loyal companionship to people who decide that this is the right breed for them.”

When the movie was released, the AKC® along with the Irish Terrier Club of America released a message that potential puppy owners should carefully research a breed when buying a dog, and should buy only from a reputable source. To this end, the AKC worked with 20th Century Fox and the Irish Terrier Club of America to create a public service announcement that reminded people to do their homework when adding a dog to the family.

We were never able to learn the name of the breeder who bred these movie dogs, but we can share one last bit of movie trivia: The dogs seen during the ending credits were winners of a photo/essay contest hosted by www.dogster.com. Members had to submit a photo of their dog along with an essay explaining why their dog is a hero.