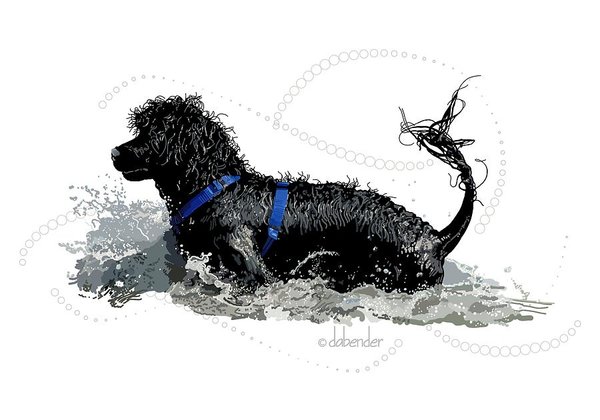 The Portuguese Water Dog’s AKC standard allows for two types of coat: Curly (or as the Portuguese would say, Cão de Água de Pelo Encaracolado) or wavy (or Cão de Água de Pelo Ondulado). Some breeders are of the opinion that the best time to evaluate coat type is immediately after a bath and grooming since a “dirty” wavy coat tends to curl around dust and dirt particles. Once the coat is clean, the sheen of a wavy coat is more easily seen. A curly coat, these folks opine, will not shine.

It’s been said that the Portuguese Water Dog just might be the most genetically studied breed in the world.  The University of Utah’s Georgie Project — named after founder, K. Gordon Lark’s Portuguese Water Dog,  examined the genomes of more than 1,000 PWDs, received X-rays from 600 PWDs, and conducted more than 150 autopsies on the bodies of dogs whose owners donated them for research.  Indeed, Elaine Ostrander, head of the Dog Genome Project at the National Human Genome Research Institute in Bethesda, Maryland recalls a Specialty dog show where owners and breeders stood in line to donate samples of their dogs’ blood for the project, and more than 400 samples were collected.

One factor that makes the breed ideal from a geneticist’s standpoint is variation within the breed, and one of those variations is the different coat textures. Georgie Project data showed that three genes (named RSPO2, FGF5 and KRT71 )  control 90 percent of the seven coat types seen in purebred dogs. Study co-author, Kevin Chase, a University of Utah research specialist in biology added,  “We helped identify the gene that controls curly or wavy coats.”

As interesting as this is to dog owners, a side benefit was that the findings also pointed the way toward understanding complex human diseases caused by multiple genes.  Purebred dogs matter, not just to those of us who love one, but to all of us whose health benefits from the study of them.  As for the Georgie Project, the idea to use the Portuguese Water Dog for genetic research came from a breeder, not a scientist. After Gordon Lark’s dog, Georgie, passed away, he contacted “Karen,” a breeder.  She sent Lark a puppy for free on the condition that he study the genetics of Addison’s disease, a form of which strikes both dogs and people.  The Georgie Project was born thanks to a breeder.