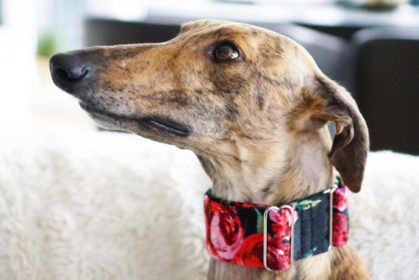 Today’s dog owner is spoiled by the rich assortment of books written about dogs, and in particular, specific breeds, but when one considers how long dogs have been around, it was relatively recently that any words were written about dog breeds at all.  George R. Jesse‘s Researches into the History of the British Dog written in 1866 was the first of its kind to deal with the history of any specific breeds. It’s possible that public interest inspired the writing since the first one-breed dog show was held in 1840, and in 1859, the first organized all-breed show occurred at Newcastle upon Tyne: Fifty Sporting breeds were entered, twenty-seven setters and twenty-three Pointers.

The book is available on-line, and there are gems waiting for the person willing to navigate Middle English writing. One such passage:

“In Hawes’s ‘ Passetyme of Pleasure,’ written in the time of our Seventh Henry, Fame is described as a beautiful lady on a palfrey swift as the wind, with two milk-white greyhounds by her side, on whose golden collars in letters of diamonds were inscribed Grace and Governaunce. Collars are fre- quently mentioned in the inventory of furniture in the palaces of Henry VIII., MSS. Harl. 1419 : in the Castle of Windsor : ” Two greyhoundes collars of crimsun velvett and > EoUs of Parliament, vol. vi. p. 354. ‘ Ibid. Chap. XLVII. DOG’S COLLARS. 135 cloth of gold, lacking torrettes.” — “Two other collars with the kinges armes, and at the ende portcullis and rose.”