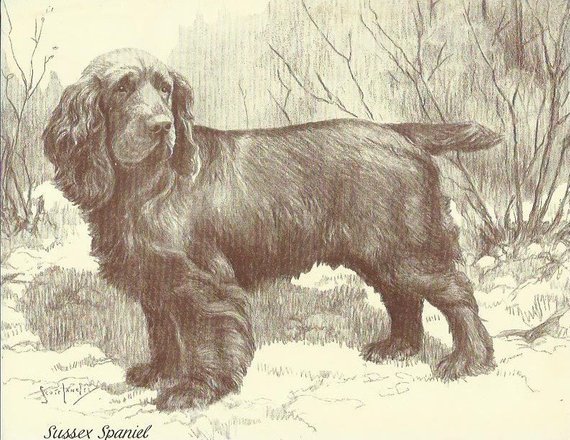 The AKC currently registers 190 dog breeds, and only two of them have standards which mention “frowning” as part of the descriptions on breed expression. Because of its heavy brows, a somber, serious, and “frowning expression” is an ineffable part of a Sussex Spaniel’s expression, while an expression that is essentially scowling, as well as “dignified, lordly, discerning, sober and snobbish, one of independence” is achieved in the Chow Chow by its marked brow, and a sufficient play of skin to form frowning brows and a distinct furrow between the eyes.

Though Sussex Spaniels aren’t likely to be worriers, we suppose, their owners in the UK have good reason to be on their behalf: The breed is listed on the Kennel Club’s list of Vulnerable Breeds (the UK’s version of our own AKC and UKC),  dog breeds of British origin which are considered to be vulnerable because their numbers are declining. Last year (2017), a shocking number of Sussex Spaniels – only 56 – were registered with the club. It is difficult to sustain a breed when fewer than 300 registrations take place in a year, and we bring attention to this marvelous breed’s vulnerable status in that country. In this country, 754 Sussex have been registered with the AKC since 1997,  an average of 75 dogs per year (1997-2006).

Happily, the Chow Chow is in good shape, population wise, but we must all be vigilant protectors of our respective breeds.