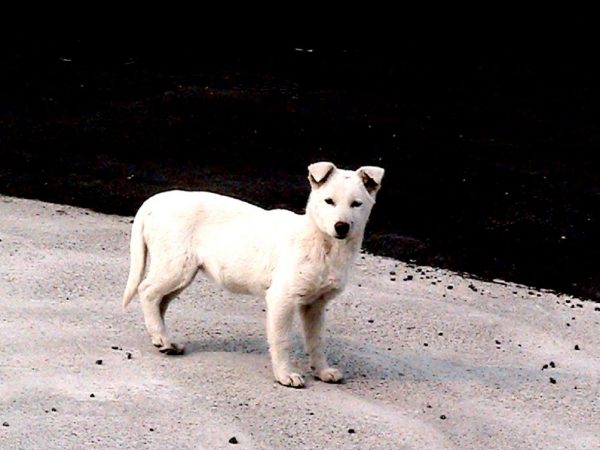 As breeds go, this one is quite old and is believed to have been introduced to Cheju Island in the Korean Strait some 5,000 years ago by the Chinese. Alternately known as the Jeju, Cheju Dog, Chaeju, Jeju Dog, JejuGae, or more commonly, the Jeju Dog, the breed has a past that Westerners will find disturbing:  In 1996, it was announced that two slaughterhouses were about to open on the island specifically to prepare dog meat for local restaurants. How, one might ask, does one eat an animal that is also kept as a pet. Evidently, a distinction is made between dogs for the cook pot, and dogs as pets, but that’s not what nearly drove this breed into extinction. Japanese authorities ordered the slaughter of nearly all indigenous dogs in Korea between 1910 and 1931, and very few domestic dogs escaped. The Cheju Dog was one of the breeds that survived. The breed numbers were slowly rebuilt so that by the end of the 20th century, maybe 100 of the dogs existed, all of them living on the island.  As of 2010, it’s said that only 69 dogs are there, but that same year, Korea designated the Jeju dog as a National Heritage animal which should help protect it.

The Cheju Dog, the largest Korean-based dog breed, is similar to the Jindo dogs in terms of color and size, but the Cheju Dog has pointed tails. They are said to be quick, loyal, and make ideal hunting companions when hunting pheasants, deers, and badgers. We’re rooting for them to thrive with some protection.