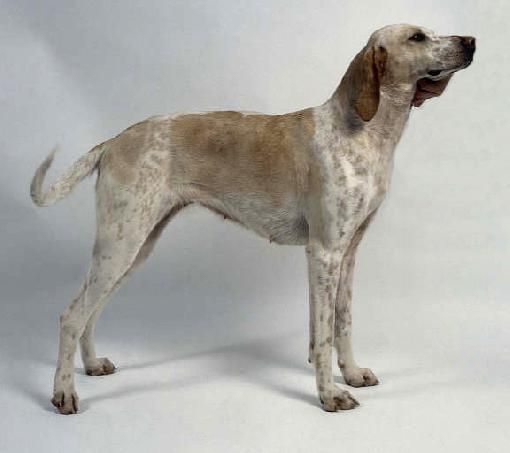 How many dogs, do you supposed, are named, “Billy?”  Taking it a step further, how many Billys, we wonder, are also named Billy?  Probably not many. The large scent hound from central western France is named for its place of origin, the Chateau du Billy in Poitou, France, and not a boy’s name.

The Billy is the last breed to have descended from the “King’s White Dog,” a hound that was highly fashionable with royalty between King Francois I and King Louis XIV’s reigns. The dogs were used as pack hunters for centuries, but royal packs were disbanded during the French Revolution, and eventually, the King’s White Dog disappeared as a breed. Before that happened, however, the King’s White Dog was bred with smaller Swiss hounds to create the “Ceris.”  The Ceris, a magnificent hunter, was in turn bred with other now-extinct breeds by Gaston Hublot du Rivault who created the first Billy at his chateau.  As its predecessors, the Billy hunted deer and wild boar, but numbers fell during WWII to a mere ten dogs, and it took Hublot du Rivault’s son, Anthony, to revive and reestablish the breed in sufficient numbers to form hunt packs.

We find the Billy to be an elegant dog. He’s large, has strong bones and muscular limbs, and sports a striking off-white coat sprinkled with orange patches. The breed, described as intelligent and cunning, has a musical and harmonious voice that increases in volume and frequency to identify the type of prey it has located.  It’s still very rare outside of France, but in France, the Billy is highly valued and still used for its original purpose.  In 1973, the Billy was recognized by the FCI (Federation Cynologique Internationale), and 1996 by the United Kennel Club.

One thought on “The “King’s White Dog” Descendent”