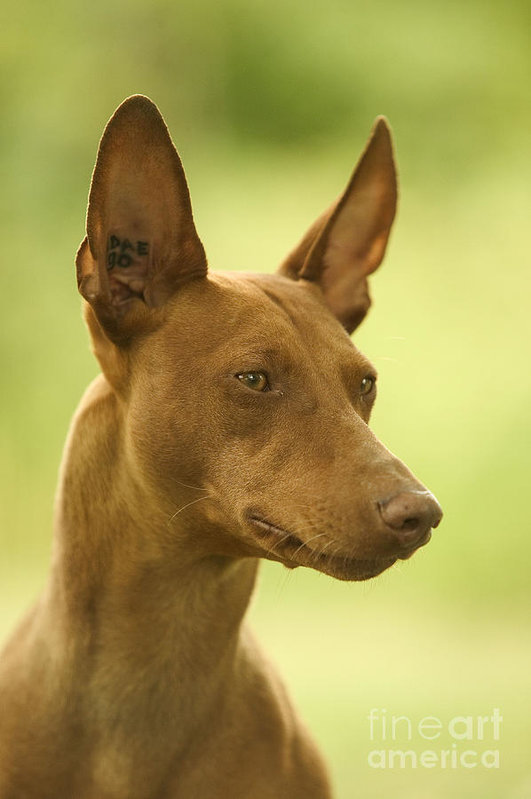 To see a dog that is virtually unchanged since the time of its introduction by Phoenician traders 3,000 years ago, look no further than the Cirneco dell’Etna (pronounced “cheer-nec-ko”), a breed that’s been present in Sicily for thousands of years.  In fact, coins minted between the 5th and 2nd centuries BC in Sicily feature the image of a pricked-eared dog similar to today’s Cirneco.
Occasionally, (and inaccurately) called the “Sicilian Greyhound” when translated, this hardy and tough breed is a success story of adaptation to a harsh climate and terrain. Cirnechi (the plural form) are superb rabbit hunters that can work under adverse conditions: Blazing temperatures, rugged land formed by volcanic lava from Mount Etna, and little food or water for extended periods of time. Traditionally, these dogs had a ferret as a hunting partner, the ferret’s job to flush a rabbit from its burrow after the dog located it. The Cirneco has evolved to being able to hunt in this environment so beautifully that he is able to silently stalk small game without giving himself away, and also not to hunt his partner!

There is a bit of debate about the breed’s origins. Many experts believe the Cirneco’s roots are to be found with ancient Egyptian prick eared dogs. As seafarers and traders, especially the Carthaginians, sailed between the Mediterranean and Northern Africa, they spread the dogs

from what is now Syria, Lebanon and northern Israel, as well as Italy, North Africa and Spain. Other experts, however, suggest that the Cirneco has no roots in Egypt at all, and is entirely Sicilian. A third theory  holds that it was the Greeks spread these dogs, entirely plausible because the Greeks were equally accomplished seamen/traders as the Phoenicians, and they had nearly as great a presence in all the areas that this breeds came to be found.  Helpful to note is that before the Romans conquered Sicily, the island was split in half: The eastern part controlled by Greeks, and the western half controlled by Carthage.
The affix “dell’Etna” was added to the name, Cirneco in 1939 when the first breed standard was accepted by the Italian Kennel Club, the name, “Etna,” of coursing, coming the largest active volcano in Europe. It’s situated on the east coast of Sicily, an area with the highest concentration of Cirnechi.

2 thoughts on “Known by Several Names, Including the Sicilian Rabbit Dog”