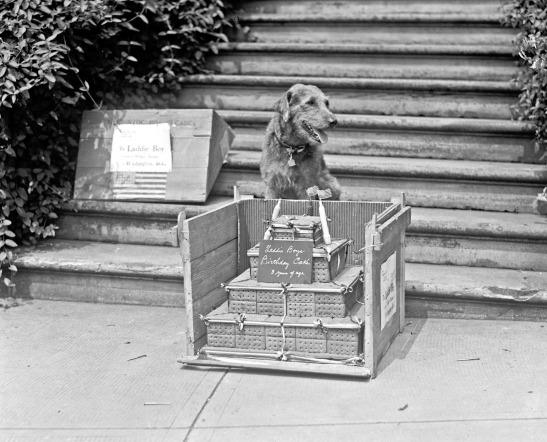 An Airedale Terrier named, “Laddie Boy” was possibly the first White House canine celebrity. He came into his own by being the dog who replaced “Oh Boy,” an unfortunate English Bulldog who died not long after arriving with the Warren Harding family. “Laddie,” or, using his kennel name, Caswell Laddie Boy, belonged to a handsome man utterly devoted to his dogs, and in time, became the President’s constant companion.

Laddie knew his owner by name. The First Lady, Florence,” would hand the dog the morning paper and say, “Take this to Warren,” and he would. Laddie had his own hand carved cabinet chair in which he sat during meetings, and often sat on the White House steps to greet foreign dignitaries. On the occasion of one of Laddie’s birthdays, neighborhood dogs were invited to a party in which they partook of a cake made of dog biscuits and smeared with icing (seen here).

Photo from Library of Congress