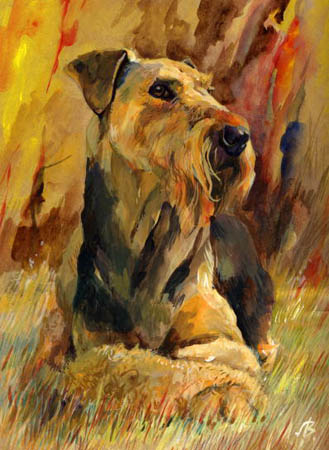 The Airedale Terrier has its roots in the British Isles, specifically, the Aire river valley of Yorkshire less that one hundred miles from the Scottish border. The breed created from the old English rough-coated Black and Tan Terrier (now known as the Welsh Terrier) with the Otterhound was intended to catch otters and rats on the banks of the Aire and Wharfe Rivers, but proved to be such a versatile dog that it found itself with a range of tasks that included war dog, guide dog, herder, and police dog.

Airedales were exhibited at a championship dog show for the first time in 1864, this one sponsored by the Airedale Agricultural Society. They were classified under different names then, names that included the Bingley Terrier, Waterside Terrier, and Rough Coated Terrier.  Fanciers of the breed decided on the name of Airedale Terrier in 1879, a tribute to its birthplace, and in 1886, the Kennel Club of England formally recognized the breed by that name.

In World War I, Airedales were used as messengers, sentries, carriers of food and ammunition, scouts, ambulance dogs, ratters, Red Cross casualty dogs, sled dogs, farm dogs, and guard dogs. They were renowned for their ability to withstand devastating injuries and still deliver dispatches. One sources wrote that over 3,000 Airedales lost their lives in the trenches.

After the war, the popularity of Airedales spread, and the breed became beloved family pets, as well as one of the first breeds trained for police work in Germany and Great Britain.  Word of their hunting prowess spread, and with American hunters, Airedales became known as the three-in-one gun dog – perfectly suited to hunting waterfowl on water, game birds on land, and four-legged mammals.

The breed, the largest of the terrier breeds,  is in good shape today, and Albert Payson, in an article for Nature magazine summed up the breed thusly:

“He is swift, formidable, graceful, big of brain, an ideal chum and guard.  There is almost nothing he cannot be taught if his trainer has the slightest gift for teaching. Compact, wiry, he is ‘all there’…A perfect machine, a machine with a brain plus.”

Airedale Terrier by Vitali V. Lobov. This piece and other fine works can be found here.

18 thoughts on “A Snippet of Airedale Terrier History”